Media agency Mindshare has joined forces with Fairfax Media to investigate the effectiveness and impact of native advertising.

Mindshare CEO, Katie Rigg-Smith, has revealed the findings of the research, Mindshare Unlocks: Native in Sydney.

At the launch, Rigg-Smith said: “Brand funded content has clearly been around since the inception of marketing itself, but in the last 12 months we’ve seen the evolution around the topic of native advertising become more and more prevalent.”

The study defined native as advertising that matches the form and function of the platform in which it’s delivered. A key example that features heavily in the research is sponsored Facebook posts.

The study looked to answer the question on many advertisers lips, does native even work?

The answer from Liz Harley, Mindshare’s head of research and insights: “It depends.”

The research found seven out of 10 people believe that native advertising, if done well, can actually benefit brands. Harley said: “This means that overall, people are aware of it and they’re okay with it.”

The online study of 1,681 Australians between the ages of 16 and 65 found that of the 17 different types of native advertising, on average, the participants were aware of five or six different types. 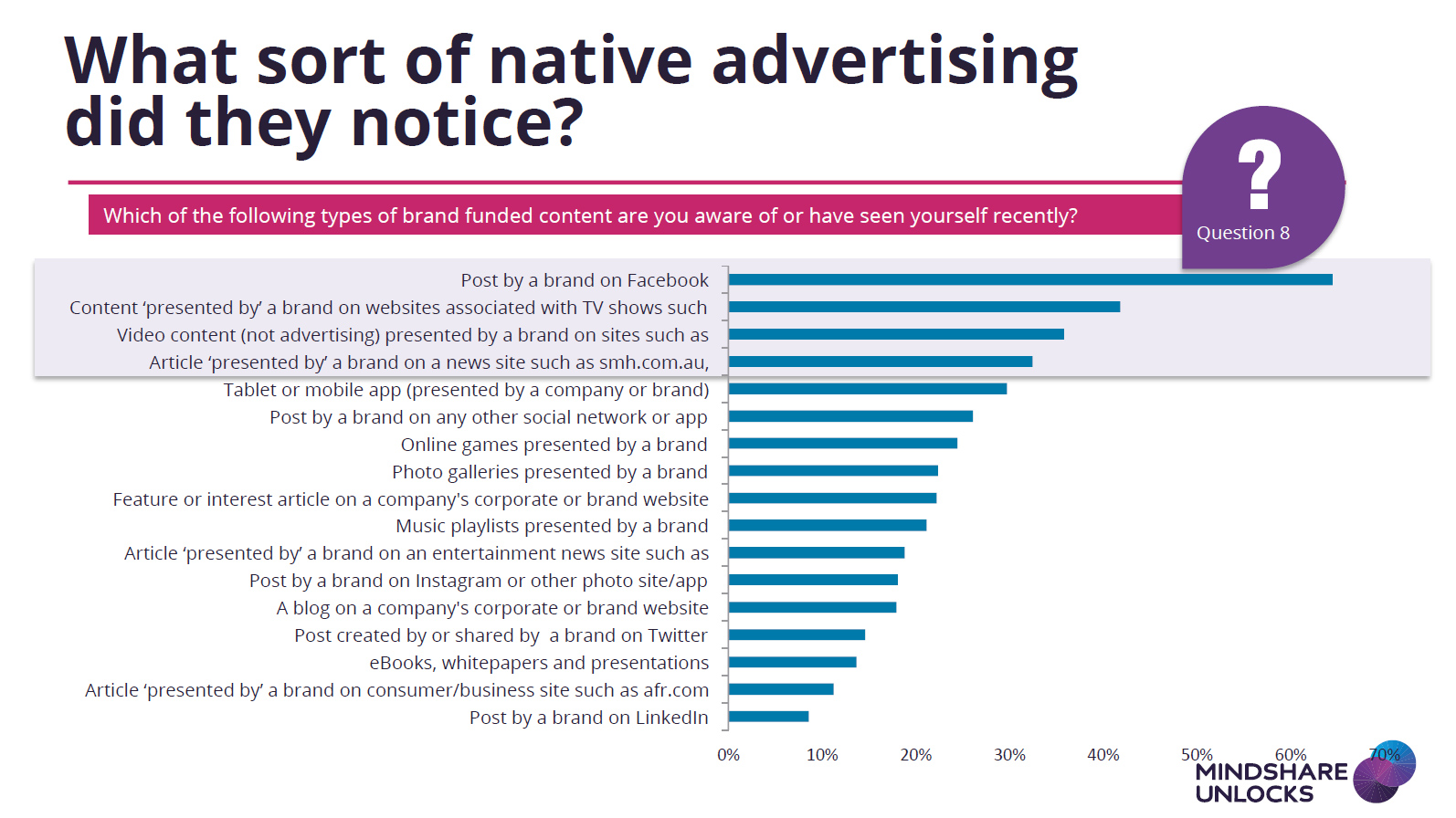 “Native is the perfect way to deliver the information and entertainment that people crave so much,” said Harley.

The research found most people were commercial realists, meaning consumers understand that in order to to avoid having to pay for content, they need to endure advertising. Harley said that these consumers however, would rather have advertising like native, “that has some kind of value exchange attached to it compared to banner ads or pop-up ads which are really disruptive and very annoying”.

Having combined four of the metrics in the research (attention, awareness, affinity and frequency), an “engagement map” was revealed. 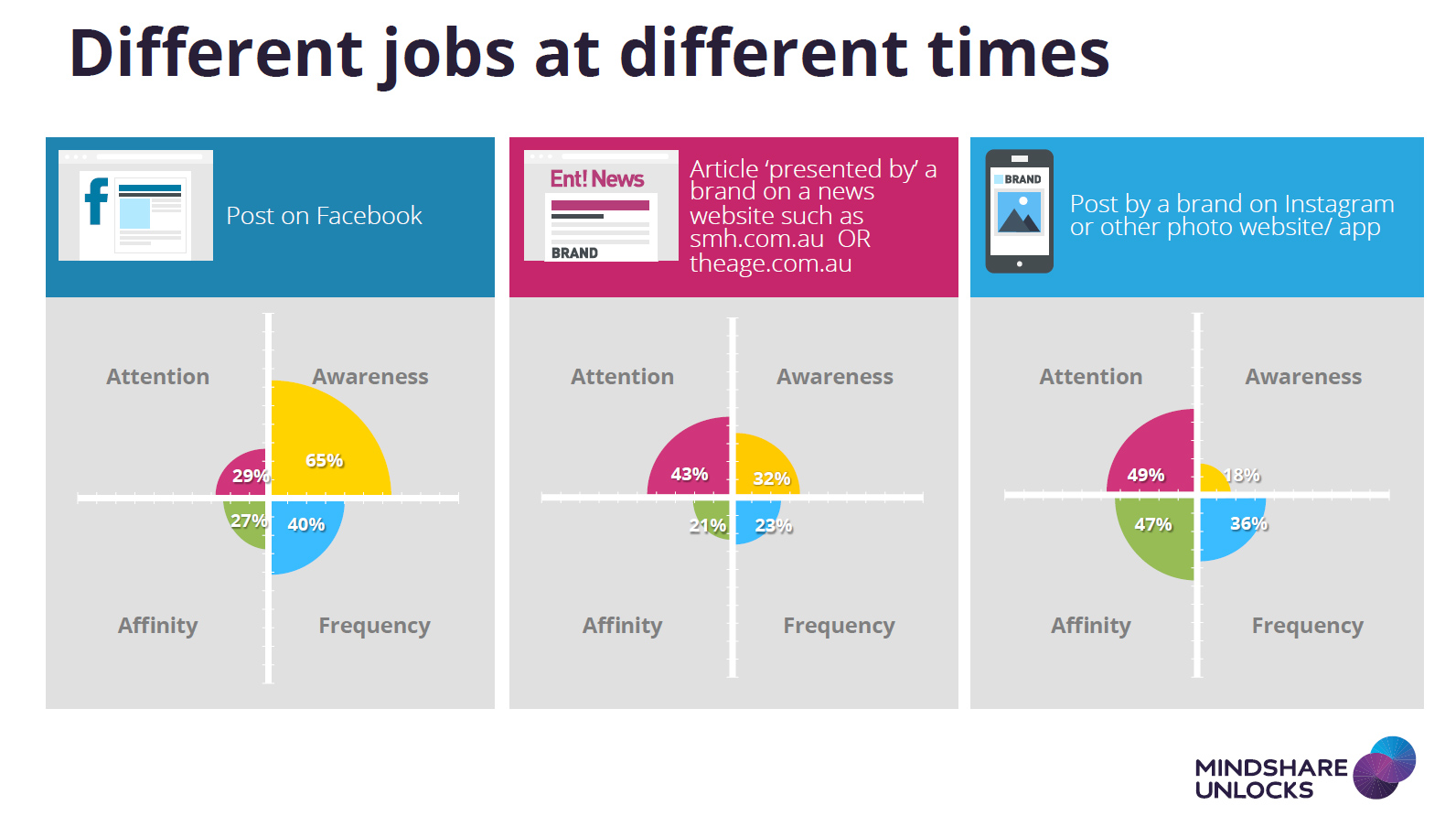 The consumer experience can be broken down into four stages; discover, invoke, act, share. “We can use this research to understand how different types of native advertising can engage differently and can be used selectively to produce specific business opportunities,” said Harley.

To get consumers to ‘discover’ or generate awareness, a brand will achieve the most favourable business outcomes through native ads in the form of blogs, feature articles and white papers.

To generate brand engagement, Harley explained, “You’re better off to use more visual types of content.” Delivering native ads through Instagram, video and mobile apps is shown to be most effective at ‘invoking’ consumer interest.

In helping consumers ‘act’ or make a decision about which brand to buy, long form native ads such as features in addition to photos are most compelling to consumers.

And finally, to generate buzz around your brand so consumers ‘share’ your message, or become brand advocates, then native content via Instagram, Facebook and entertainment news sites such as Buzzfeed have the greatest impact.

“Native, when done well, is the perfect opportunity to bring interesting and relevant content to people when they most want to engage,” said Harley.

She made a point of magnifying the 18-24 year old group. 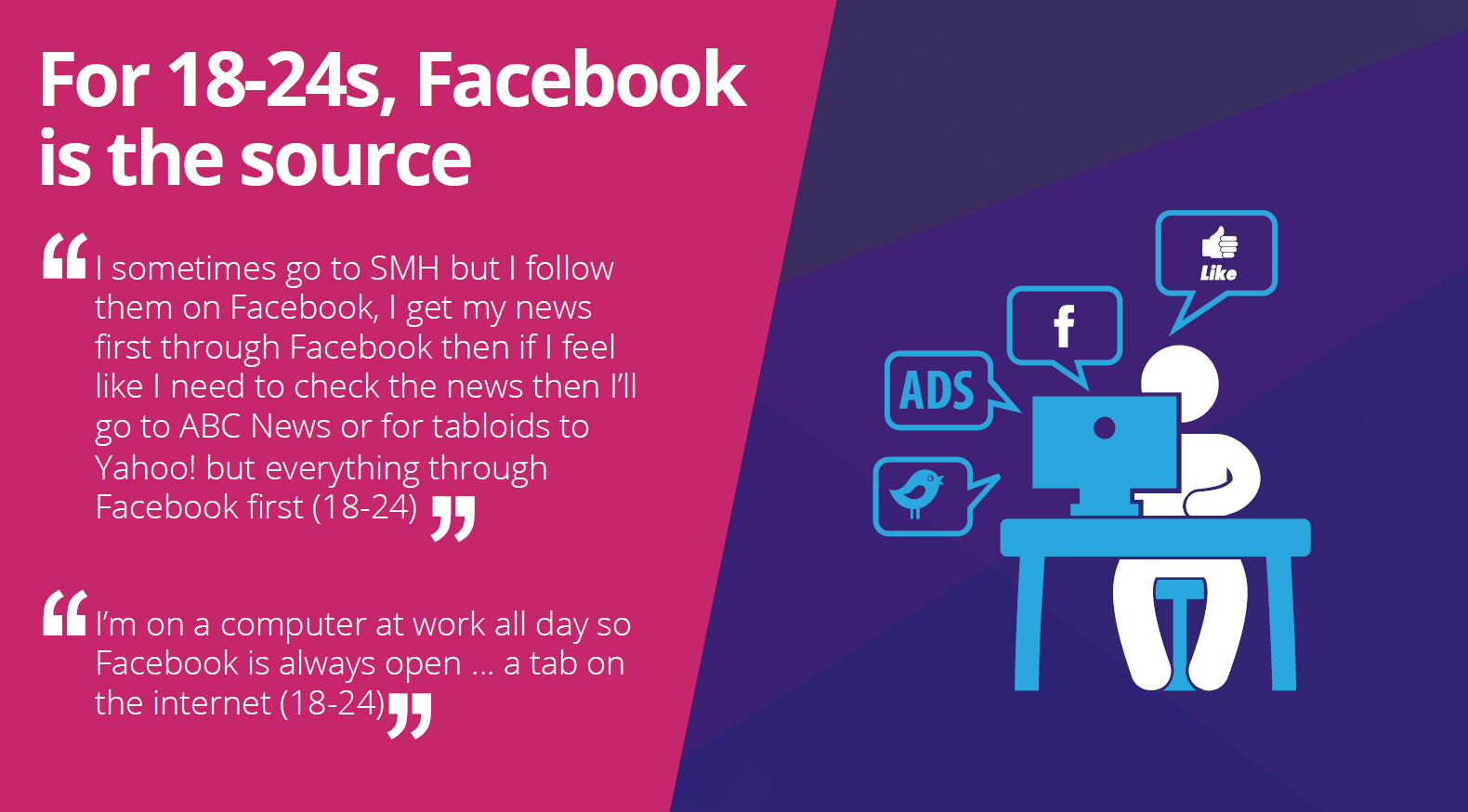 For this demographic, the Facebook feed is their 24/7 source of news. If they’ve not “liked” a brand, and it appears on their newsfeed, Facebookers will consider this really annoying. “Facebook shouldn’t be thought of as an ‘open door’ you still need to be invited in,” said Harley.

55% of people see native as a reliable and credible source of information which increases to 60% for the 25-29 year old group. “So brands can feed people’s hunger for content in a credible way,” she added.

“Because the internet is about selecting sites and information with personal relevance, there is a high tolerance for brands which are relevant to a consumer’s interest,” explained Harley. 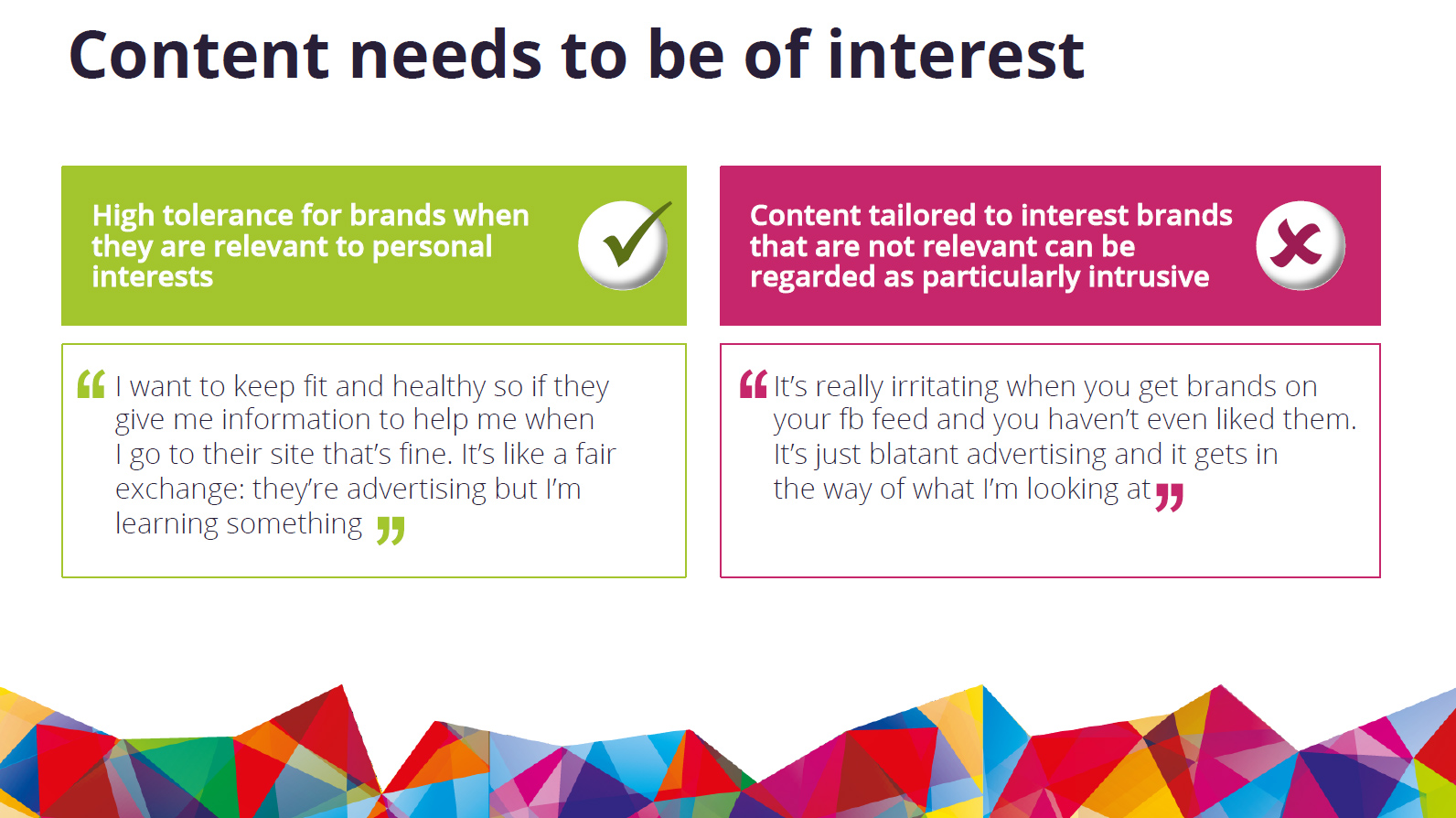 But brands beware, if you try to pull the wool over the consumers’ eyes and share content that isn’t relevant to them, Harley said they’ll find it to be incredibly intrusive and annoying. “It will create a negative brand sentiment.”

The research found topics of interest to the majority of participants included entertainment, technology, travel and food followed by news, retail, health and lifestyle.

Harley insists the news category must remain independent. “It would be the worst thing to the a headline brought to you by a brand.”

Harley ended her talk by reminding the audience that being transparent about your commercial intentions a native ad is imperative, as is giving the consumer the control to access the content.

“When the branding is subtle, it’s acceptable, and not intrusive. But some respondents had an issue with branding that was too subtle.” Consumers then feel as though the brand is trying to fool them. “If the consumer feels they are part of the experience, and actively click on a native piece of content, this is far more beneficial to the brand then them deploying pop-ups, said Harley, “which are highly intrusive.”