By 2020, more than three-quarters of all online display advertising revenue will come from mobile, according to a white paper released by IHS Markit, a leader in critical information, analytics and solutions.

“Mobile advertising has grown stronger than any other medium in the last four years, and now accounts for a significant proportion of online advertising revenue,” said Qingzhen Chen, senior analyst at IHS Markit. 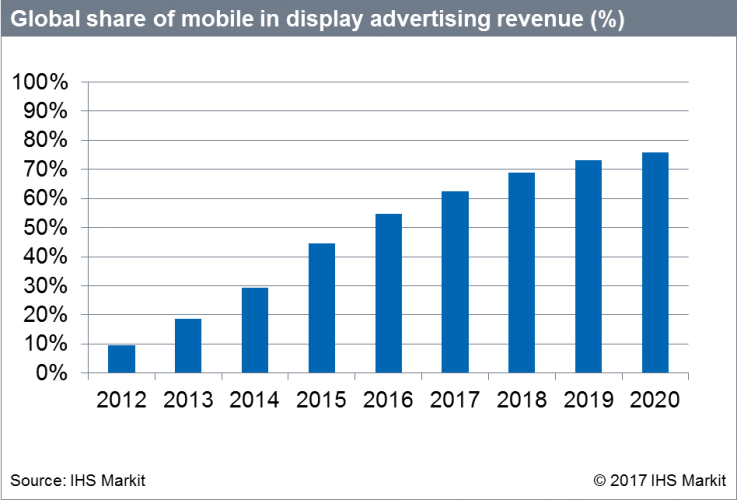 In 2016, worldwide mobile advertising will grow 42 percent, to $US41 billion and for the first time will generate more than half—55 per cent—of all online display advertising revenue, said the latest IHS Markit white paper.

China has maintained its growth momentum despite economic restructuring, but the real growth engine comes from online. With roughly $US33 billion in revenue for 2016, the Chinese online advertising market is the second largest in the world. Online grew 17.5 percent in 2016 and will grow 14 percent in 2017, driven by a strong growth of online video (51 percent and 32 percent growth, respectively).

“In 2016, the Chinese online ad market went through some turbulence and reshuffling,” Chen said. “China introduced its first set of online advertising regulations, which in the short term had reduced online advertising revenue, but in the long term, we expect to see a more sustainable online ad ecosystem from this development.”

On the other hand, after a period of rapid growth, TV has entered a third year of consecutive decline with a single-digit contraction. Many people are switching to online for content consumption and seeking wider range of content, from foreign content to user-generated content by popular vloggers. TV in China declined 2.7 percent in 2016, and IHS Markit expects a three percent drop in 2017. 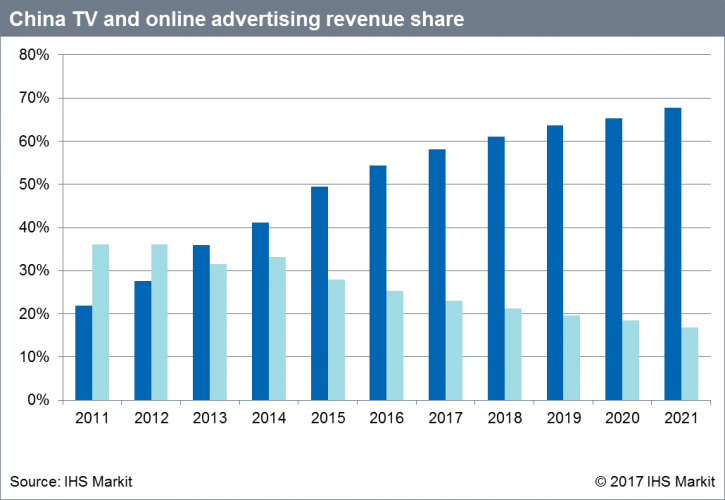 Baidu, Alibaba and Tencent — known collectively as the B.A.T. in China –own 36.5 percent of the total ad market with a total of CNY 160 billion ($24 billion) in 2016. “The trio has absorbed large TV brand budgets and online ad budgets, and continues to expand aggressively into digital,” Chen said.

The trio made a total of 262 investments, 27 acquisitions and one joint venture between 2009 and 2016. Mobile app companies received most investments from the trio for that period.