Industry body Think TV has released the results of a study it has conducted into the views of people who work in the advertising and media industries versus that of everyday people who don’t.

The study, called AdNation, surveyed a reported 1636 people in adland and 1016 ordinary Aussies.

The study found that Australians consider TV advertising to be the most liked, trusted, and memorable form of advertising and the one that draws the most attention to brands people have not heard of. 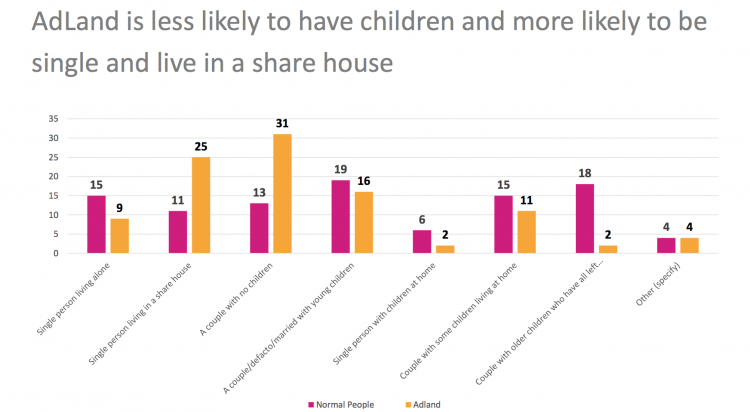 However, advertising, marketing and media professionals were considered “out of touch” with most of the media habits and attitudes of average Australians, who are considerably less likely than adland to use social media and SVOD.

The study revealed that many advertising, marketing and media professionals are uninformed about the media consumption habits and attitudes of “normal” Australians.

Leading marketing academic professor Karen Nelson-Field conducted the survey to identify differences and similarities in the two groups’ lifestyles and their usage of – and attitudes towards – different media. 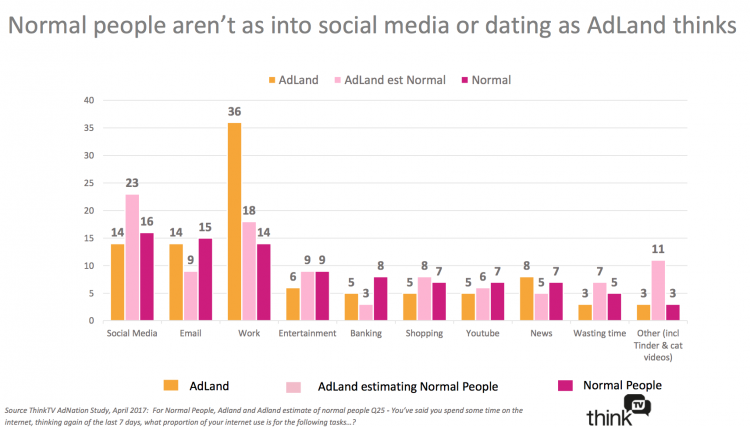 AdNation 2017 reveals that industry professionals over-estimate what percentage of average Australians have used social media and subscription video-on-demand in the previous seven days, in some cases by a huge margin.

This is perhaps not surprising given that adlanders were found to have radically different lifestyles and media consumption habits to those of normal people, including a much larger online footprint than the rest of Australia, particularly when it comes to social media. 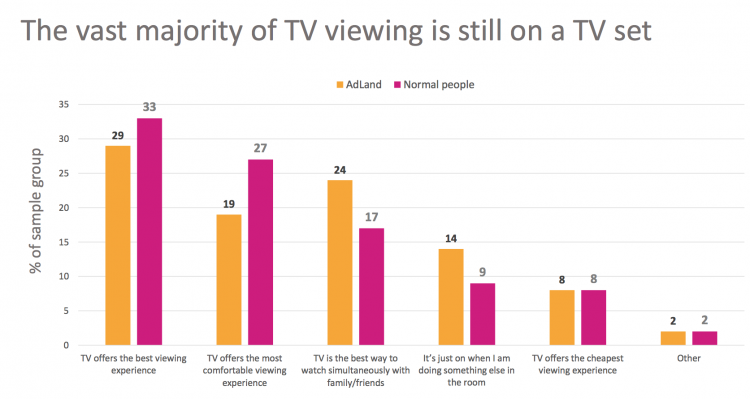 Some key findings from AdNation 2017:

Compared with the average Australian, adland professionals are younger, less likely to have children, nearly three times more likely to have a gym membership and more than twice as likely to be single and live in a share house. They are more time-poor, working twice as many hours, at the expense of TV, radio, time with family and pets.

Compared with adand, normal people are 38 per cent more likely to have fly screens, and twice as likely to have a lawn mower, underlining the distinct lifestyle differences between the two groups.

On the other hand, adland types are even more likely than normal people to have watched TV in the last seven days (96 per cent to 93 per cent). But AdLand overestimates TV viewing on laptops by 78 per cent.

Two-thirds of normal people multi-screen while watching TV. Of those, 90 per cent say they can still engage with TV whilst multi-screening.

Adland also overestimates people’s use of online platforms and services significantly, in some cases massively, as the following table shows.

Normal people were clear in identifying TV as the most likely place to find advertising that draws attention to a product, brand or service they had not heard of, with 47 per cent electing TV, two and a half times more than the next media channel, social media, which was chosen by 18 per cent of normal people. In almost direct contrast adland nominated social media as the most likely medium, with 44 per cent choosing social media, and only 19 per cent selecting TV.

Professor Nelson-Field said: “Even as someone who operates in media circles I was surprised at the level of disconnect between the media group and the reality of normal Australians. AdNation is a very important piece of work because it really identifies where the conversation needs to change.”

Kim Portrate, chief executive of ThinkTV, said: “We all know that in the world of marketing, media and advertising we live in a bit of a bubble. AdNation 2017 pops this bubble and allows us to have a good laugh at ourselves.

“But it also makes a serious point. Knowing what people like, feel and do is critical to our success when it comes to growing brands. But we also know that our own preferences can lead to projection bias, which ultimately impacts on the spending decisions we make about media.

“AdNation 2017’s findings represent a big opportunity for marketers and advertisers to reassess how in touch we are with the reality of everyday Australians. We need to keep their actual media consumption habits front of mind rather than simply using ourselves or our friends as a sample of one or a few.

“The findings also provide a fresh opportunity to reassess the power of TV to grow brands. TV advertising emerges the clear winner from AdNation 2017 as the most liked, trusted and memorable form of advertising and the one that draws the most attention to brands you’ve never heard of.”

People in adland are more likely to prefer lamb as their favourite barbeque meat.