Advertise with us
Posted 9 December, 2019


Advertisers will increase their global ad expenditure by 4.3 per cent in 2020, but the commercial audiences supplied by media owners will shrink by 1.6 per cent, fuelling a 6.1 per cent increase in media prices, according to Zenith’s Advertising Expenditure Forecasts, published today.

However, according to the report, Australia (as part of Zenith’s “advanced Asia” category) will see snail’s pace growth of just one to two per cent annual growth until 2022.

Zenith Sydney’s head of investment, Elizabeth Baker (main photo), said local internet adspend is still expected to grow by seven per cent this year, driven largely by online video. This will reduce to four per cent in 2020 and 2021 in light of pervasive economic uncertainty, but will experience a resurgence of six per cent in 2022, as the economy stabilises and the implications of 5G and its technologies are fully realised.

Baker added: “Assuming that the economy stabilises both locally and globally, we do anticipate a stronger market from 2022, with the current estimate sitting at 2.7 per cent. Although we’re expecting a slowdown, digital advertising in all its forms will continue to grow at a healthy rate. This reflects both the continuing migration of audiences to online platforms and the transformational impact of 5G.” 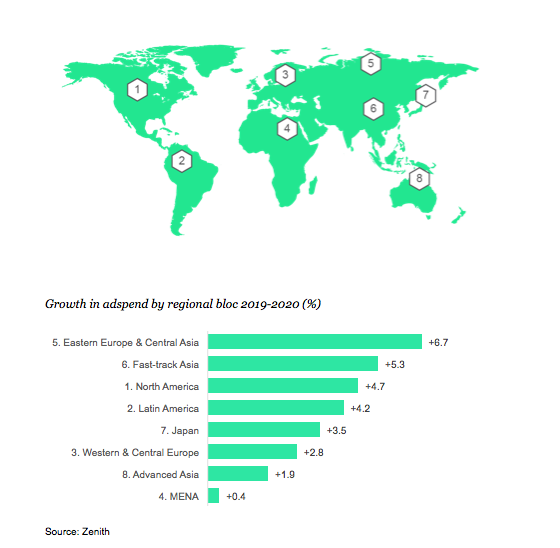 When it came to “Adavanced Asia”, the report noted: “Apart from Japan, there are five countries in Asia with developed economies and advanced ad markets that we have placed in a group called Advanced Asia: Australia, New Zealand, Hong Kong, Singapore and South Korea. In these markets adspend growth normally sits in between growth in Fast-track Asia and Japan, and generally closer to Japan. Adspend growth turned out to be stronger than expected in 2018, ending the year at four per cent, but has slipped back to 1.4 per cent in 2019. Singapore has suffered the worst year of its four consecutive years of decline, with an estimated 13 per cent drop in adspend this year, triggered by a sharp drop off in exports related to the US-China trade war. We forecast three per cent average annual growth for Advanced Asia to 2022, assuming mild recovery in Singapore from 2020.”

According to Zenith, demand for advertising has grown consistently throughout this decade. To sustain market share, large brands need to maintain brand awareness among buyers and potential buyers, which requires regular, brand-building campaigns with mass reach. The same goes for smaller brands looking to grow their business. Meanwhile small businesses, which may not have advertised at all previously, have embraced targeted advertising on digital platforms and injected new demand into the market. Advertising expenditure has grown by 5.1 per cent on average since 2010.

However, traditional mass audiences are shrinking: first print, and now television in key markets. Many lost audiences are replacing television viewing with non-commercial video like Netflix, Amazon Prime Video, HBO, and eventually Disney+, reducing available audiences and creating fragmentation. The use of adblockers means that some audiences have low exposure to digital advertising. This rising demand and falling supply is increasing prices rapidly. The supply of commercial audiences has shrunk by 1.3 per cent a year on average since 2010, according to exclusive Zenith research, while media inflation has averaged 6.5 per cent a year.

“The days when we could find audiences all in one place are long gone. Now, however, technology empowers us to find them wherever they are, online or offline, and win back value for our clients through efficiency and effectiveness – by ensuring that we target and reach consumers with the right message at the right point in the consumer journey,” said Matt James, global brand president at Zenith.

US-China trade war to counter the quadrennial effect in 2020

Next year is a ‘quadrennial’ year, benefitting from the Summer Olympics, UEFA Euro 2020 and US Presidential elections, which occur every four years. These ad expenditure stimulants are expected to add US$7.5bn into the global ad market. In normal circumstances, adspend growth in 2020 would be comfortably above this year’s growth rate. However, forecasted 4.3 per cent growth next year is barely above 2019’s estimated 4.2 per cent growth. The US-China trade dispute is disrupting economies across the world, interrupting supply chains and rerouting trade and investment. This is reducing growth and raising uncertainty, making advertisers more cautious about budgeting. Zenith estimates this economic headwind will cost the global ad market 1.1 percentage points of growth in 2020. Without it, the market would be up by 5.4 per cent.

Despite the trade dispute, the US and China are still leading global adspend growth. The US ad market is forecast to grow by US$39.1bn between 2019 and 2022, while China grows by US$10.3bn. Together they will account for 56 per cent of all growth in ad expenditure over the next three years. China’s growth rate is slowing, however, as its ad market matures. After years of being a production-led, high-growth economy, China is transitioning into a consumer-led developed economy, and its ad market is becoming more similar to other developed economies. Chinese adspend is forecast to grow 4.1 per cent in 2020, compared to 4.8 per cent in the US.

The third-biggest contributor is India, which will grow by US$4.3bn between 2019 and 2022. Indian adspend is steadily increasing by double-digit rates, with growth forecast at 12.4 per cent in 2020, 12.9 per cent in 2021 and 12.6 per cent in 2022. The Indian ad market has great potential for long-term growth, contributing just 0.3 per cent of GDP this year compared to 0.6 per cent in China and 0.7 per cent for the world as a whole. At current development rates, by the mid-2020s India will overtake China as the main source of growth in Asia Pacific, and the second-biggest in the world.

Online video and social media will remain the fastest-growing channels between 2019 and 2022, growing respectively by 16.6 per cent and 13.8 per cent a year on average, thanks mainly to continued increases in consumption on smartphones. Cinema will be in third place with 11.5 per cent annual growth, driven by surging demand in China, but will still only account for 0.9 per cent of global adspend in 2022.

“As geopolitical tensions wipe out most of the expected gains from sport and elections, 2020 will be a disappointing quadrennial year for the ad market,” said Jonathan Barnard, Zenith’s Head of Forecasting. “If the trade war is settled, we are more confident for 2021, forecasting 4.5 per cent growth in global adspend despite the absence of the quadrennial events.”