When you launch an untried electric car into the most crowded car market in the world (Australia’s), at a price that would make most luxury brands blush, then it throws up some unique marketing challenges.

And that’s exactly what Tesla faced when it brought the first of its electric-powered models to the Aussie market in December 2014. 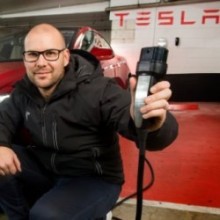 Tesla Australia’s senior marketing and communications manager, Health Walker (pictured above), told B&T there were a number of marketing challenges to overcome when the brand opened its first local showrooms. Firstly, Tesla actually regards itself as a tech company first and a carmaker second; not to mention all the other preconceived ideas that surround electric cars like performance, range and changing entrenched attitudes to electric car ownership.

“When most Australians think of electric powered cars they think of a golf buggy,” Walker, who’ll be speaking at the upcoming ad:tech conference in Sydney, said.

“Our biggest challenge was to change attitudes (to electric cars) and the best way to describe that is it’s like living with a mobile phone; that is you plug it in when you get home and when you wake up you have a full tank of petrol in the morning.

Despite a starting price not shy of $130,000 for Aussie buyers, Walker believes it’s satisfied customers who are the brand’s best advertisement. “Our existing customers almost educate our potential new customers and as we grow the market the new owners are assisting that messaging,” he said.

Walker conceded that Tesla vehicles are perceived as expensive in the Australian market and that’s namely due to the fact that the cars are liable to the luxury car tax levy and, he adds, “all new technology starts at a higher price and starts to come down”.

Even Tesla agrees its current models are in the top-tier of pricing, however, its next model (due in 2017) will be mass-market and competitively priced (prices around the $30,000-mark have been mooted.)

And Walker believes that history is now on the brand’s side. Despite a mere 10 years as a carmaker, demand for electric vehicles is no longer a niche one.

“I’m certain there’s a number of people who have a vested interest in traditional internal combustion engines keep on keeping on. But the reality is that they’ve reached the peak of their innovation and so the timing is right and consumer awareness is higher than it’s ever been – both in terms of the environment and their hip pocket. We’re now at the point where it’s simply better to own an electric vehicle,” Walker said.

In fact, Tesla’s mission is to convert all road users to electric power and it’s actually released the patents to its engines to any manufacturer who wants them. “The more companies building electric cars simply widens the pool of people purchasing electric cars,” he said.

Walker said the brand is extremely keen on the Aussie market which is considered – alongside the likes of the US and Germany – as an early adopter of this sort of technology. “You only need to see Australia’s take-up of home solar panels – the highest take-up in the world – to know that.