According to the Roy Morgan research, Netflix remains our favourite pay TV provider with 11.5 million Australians accessing it. That’s up 17.6 per cent from this time last year.

Other smaller Pay TV/SVOD services to have grown quickly over the past year include Amazon Prime Video (up 130.7 per cent), YouTube Premium (up 37 per cent) and Fetch (up 20.9 per cent).

In its six months since launch, Foxtel’s paid sports channel, Kayo, has roped in 300,000 subscribers.

As the following state-by-state graph shows, access to Stan is at around a quarter the level of Netflix 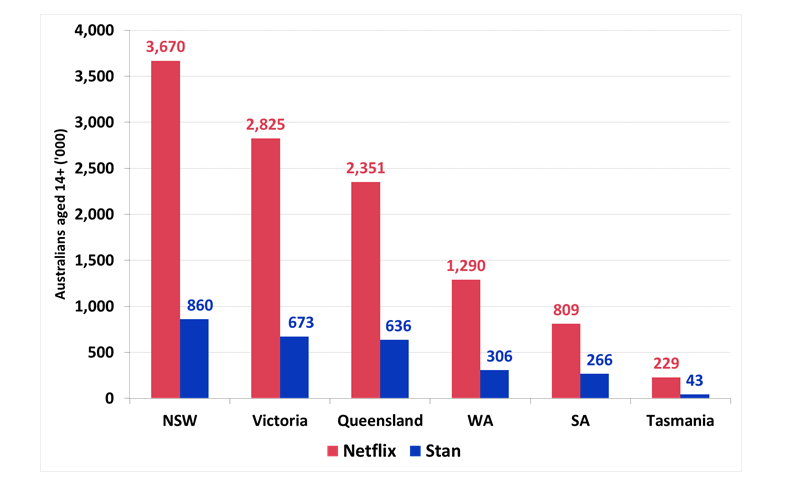 Analysis of Australians with access to Netflix and Foxtel shows Netflix has a strong appeal to Australians from all walks of life while traditional Pay TV provider Foxtel is more popular with families than with other psychographic segmentations.

Using its Helix Persona data, Roy Morgan found that Netflix is highest amongst those in the 100 Leading Lifestyles (60 per cent), 200 Metrotechs (58 per cent) and 300 Aspirationals (57 per cent) with these communities over-represented with access for the size of the population they represent, although at least half of all six communities now have access to Netflix.

In contrast there is a clear difference between take-up of Foxtel which is clearly highest amongst 100 Leading Lifestyles (27 per cent) and 400 Health and Home (27 per cent) – the two Helix Community segmentations most closely related to wealthy and middle-class families.

Fewer than a fifth of the younger 200 Metrotechs (16 per cent) or lower income Australians in the 600 Fair Go (18 per cent) community have access to Foxtel.

Michele Levine, CEO Roy Morgan, said increasing numbers of Australians are willing to pay for premium TV content as Subscription Video on Demand (SVOD) services such as Netflix, Stan and Amazon Prime Video grab an increasing share of the market.

“Over two-thirds of Australians now have access to Pay TV/SVOD services in their households as strong growth for services including Netflix, Stan, YouTube Premium, Fetch, Amazon Prime Video and new live-sport focused Kayo Sports has continued during 2019.

“A closer look at the industry leader Netflix, which is now accessible by almost 11.5 million Australians, shows the service has broad appeal across differing psychographic segmentations.

“The results indicate that the low monthly prices for the new Subscription TV services led by Netflix are driving take-up across traditional demographic boundaries while the higher cost of a full-bundle service from Foxtel is generally favoured more by larger family units.

“The competitive nature of the market is underlined when one considers there are powerful new players’ entering the global streaming video market such as Apple TV+ and Disney Plus looking to leverage off their existing user base of installed devices (Apple TV+) and TV/movie catalogues (Disney Plus) respectively.

“Netflix has undoubtedly been a star performer since launching in Australia just over four years ago in a market with a proliferating array of choices for the consumer it will be more important than ever for existing and new streaming services to correctly identify which genres will appeal to the widest possible audiences,” Levine said.