Roy Morgan today released the latest readership results for Australian newspapers for the 12 months to September 2019. Now 15.4 million, or 74 per cent, of Australians aged 14-plus read or access newspapers in an average seven day period via print or online (website or app) platforms, a fall of 3.7 per cent from a year ago. 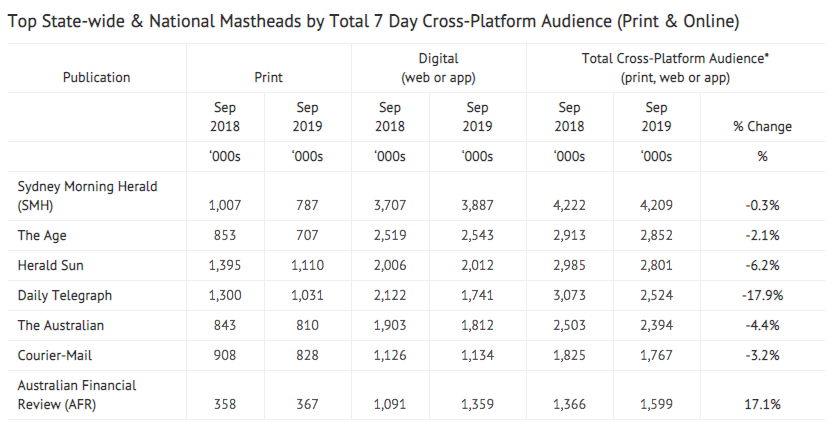 Print Newspapers now read by around three-in-ten Australians (6.2 million)
Nearly 6.2 million Australians read the listed print newspapers, including over 4.3 million who read weekday issues, almost 3.6 million who read Saturday editions and more than 3.1 million who read Sunday titles. Although print readership has declined year-on-year, these figures show around 30 per cent of Australians read print newspapers. In today’s digitally-focused world print newspapers continue to be an important advertising medium to reach both mass and niche audiences.
Weekend Newspaper Readership down from a year ago
Australia’s best read weekend newspaper is again Sydney’s Sunday Telegraph with an average issue print readership of 656,000 – down 21.6 per cent over the past year – ahead of southern stablemate Melbourne’s Sunday Herald Sun which has a print readership of 586,000 (down 23.3 per cent).
Other major titles to decline included the Saturday Herald Sun down 20.9 per cent to a readership of 560,000, The Weekend Australian down 6.5 per cent to 547,000, The Sunday Mail in Queensland down 11.8 per cent to 532,000, the Saturday Sydney Morning Herald down 25.9 per cent to 449,000 and Melbourne’s Saturday Age down 19.9 per cent to 443,000 readers.