Over the in the UK the London underground has been getting a bit of attention lately, namely thanks to some ads from protein company Protein World.

An ad appeared on around the transit system featuring Aussie model Renee Sommerfield, asking whether commuters were ‘beach body ready?’

The ad scorned a heap of backlash on social media. Memes of it erupted, people started posing next to the ads and many of them were vandalised. A petition via Change.org has been issued to get the ‘body shaming’ ads removed.

Women of London, we’re BLAZING in our no-to-#BodyShaming glory. Time to take back the body narrative. #EachBodysReady pic.twitter.com/j4Rc2a56tE

Okay, I DEFINITELY must apologize @ProteinWorld. Wasn’t considerate of others. This one goes out to all the ladies. pic.twitter.com/4p8JWZfTWR

Sommerfield responded relatively elegantly to the uproar, telling Huffpost UK Lifestyle: “I think nearly every ad campaign you have ever seen is open to interpretation. But saying the ad is body shaming by body shaming the image is very contradictory. Two wrongs don’t make a right.”

Protein World was somewhat less elegant in its retort. While many have taken to Twitter to let the company know exactly what they think of them, so too have Protein World.

The company has hit back at Twitter commentators, telling one of them to grow a pair of balls. 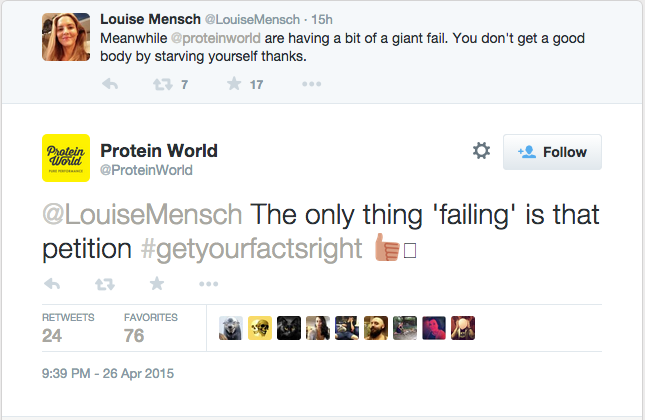 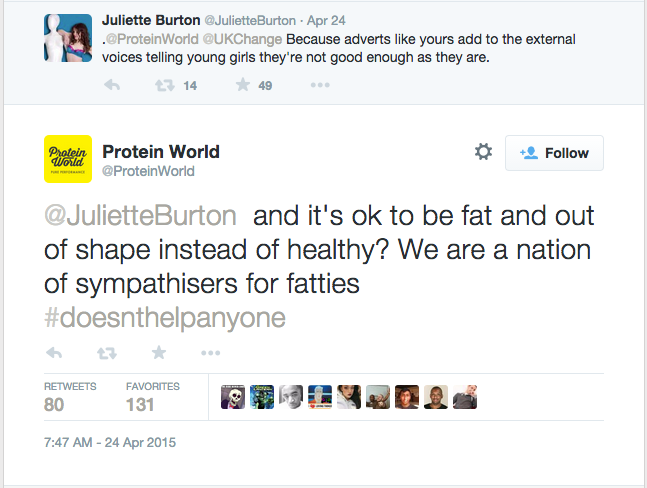 Lead image via The Mirror.