Advertise with us
Posted 9 October, 2015 
Deodorant brand Rexona has announced it will partner with Australian Men’s Health for the first time, in delivering the 2016 Men’s Health Man initiative.

Now in its seventh year, the Men’s Health Man campaign strives to unveil all-rounded Australian men who endeavor to be the best they can be in all aspects of life – work, love, mates, wellbeing, fitness and health. The Men’s Health Man is a model male, not a male model.

Jon McCarthy, marketing director deodorants and male grooming Unilever Australia and New Zealand said, “Any man committed to health and fitness would love to appear on the cover of Australian Men’s Health. Men’s Heath Man offers that unique opportunity, and Rexona is thrilled to be part of the campaign.

“Men’s Health Man is more than just a national search. It inspires everyday men to pursue a healthy and active lifestyle, and Rexona is now part of that journey. The integrated sponsor campaign across print, online, social media and at a retail level, will ensure more men than ever before will hear about this important health and fitness initiative.” 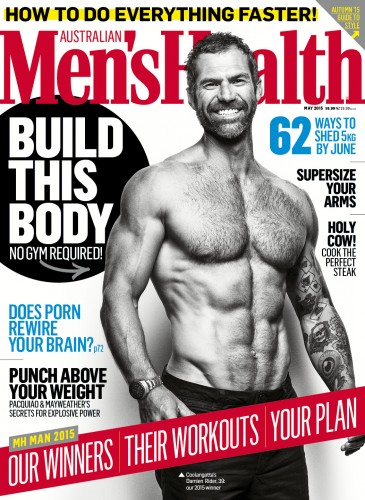 Jackie Frank, publisher of the lifestyle titles, Pacific Magazines said, “Men’s Health Man unearths amazing stories of grit and determination, and shines the light on our country’s most accomplished and physically fit men. It continues to thrive alongside the celebrity category that this year saw Larry Emdur’s inspirational body transformation captivate the attention of Australians.

“For the 2016 campaign, we are incredibly excited to be building on the success of Men’s Health Man with our new partner Rexona, to discover even more Aussie talent and showcase some celebrity favourites as you’ve never seen them before.”

This year’s overall winner’s prize package includes a $10,000 cash prize, national acclaim as the 2016 Australian Men’s Health Man and the money-can’t-buy opportunity to feature on the cover of the April 2016 issue of Men’s Health.

The 2016 Men’s Health Man supporting partners include Seiko and Schick.

“Men’s Health Man celebrates Australian men who exemplify all the things our magazine stands for,” said Men’s Health editor, Luke Benedictus. “Yes, that includes health and fitness. But it’s also about being a well-rounded man who’s determined to squeeze the most out of life.”

“We’re thrilled to be partnering with Rexona as we feel this brand shares a common vision with Men’s Health in helping men achieve the best versions of themselves.”

Once entries have been judged, six hopefuls will be flown to Sydney for a shoot with a renowned international photographer. The six finalists will be announced with the ‘voting’ element to the competition to kick off on 1 March, 2016.

Returning for a third year, and off the back of Larry Emdur’s very popular win, Men’s Health will also recognise a selection of celebrities from an array of backgrounds and professional disciplines, who exemplify the brand values and ethos of Australian Men’s Health magazine. The celebrities, who will pose shirtless for Men’s Health, will call on their loyal fan base to register to vote for them and be crowned the prestigious Men’s Health CELEBRITY Man of 2016.