Channel Nine has gone into damage control following police raids on its Sydney studios yesterday and the subsequent arrest and charging of A Current Affair reporter Ben McCormack on serious child pornography charges.

To its credit, both Nine News and ACA led with the story in its respective bulletins last night, not shying away from the seriousness of the allegations against the 42-year-old which included explicit conversations about sex acts on children which were covertly recorded by NSW police’s child exploitation unit Strike Force Trawler. 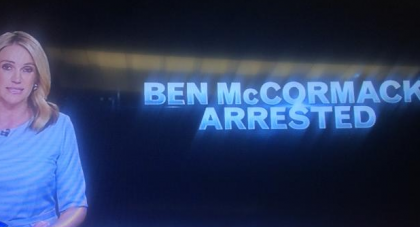 Stand in A Current Affair host Leila McKinnon (above) started last night’s program saying the program intended to cover the story of McCormack’s arrest just like any other.

“Tonight one of our most senior reporters is facing serious charges involving child pornography offences,” McKinnon said. “A Current Affair has a long history of pursuing offenders in these type of cases, and we intend to cover this story without fear or favour.” 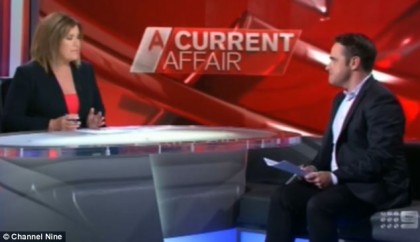 McCormack, a 25 year veteran at Nine,  has been “immediately suspended” the network said in a statement to media due to the “serious nature of the allegations.”

His arrest and charging follows new revelations that McCormack was openly gay and would regularly try and procure “baby faced teen” men via the hook-up app Grindr. Alarmingly, he was also a volunteer lifesaver at North Bondi where he trained young boys, media has reported.

Yesterday, NSW police raided Nine’s Willoughby offices and reportedly seized McCormack’s work computer. His home was also raided and his computer and mobile phone taken. McCormack himself was pulled over in his car by NSW police at 7.30am and arrested. He was taken to Redfern police station and charged with sending child pornography over the internet. He was bailed and is due back in court on 1st of May. The arrest was filmed by police and, in an unusual move, made public:

The great irony of all this is that it was McCormack who famously tracked down convicted child molester and Hey Dad star Robert Hughes while he was in Singapore and under investigation by the same unit that arrested him yesterday.

Meanwhile, News.com.au is quoting an unnamed acquaintance of McCormack’s who revealed his penchant for young looking men.

“He’s always on Grindr and having dates with young-looking men. He was a bit of a Peter Pan, didn’t want to get old,” the unnamed source said.

“He would often show photos of guys he was seeing and they would always be baby-faced teens but a legal age.

“His life is lifesaving, but he mentors and trains young boys there,” the source said.