The Nine Network has released its full-year* results with CEO David Gyngell saying the figures fell short of expectations.

Per the release this morning, Nine’s Group EBITDA (earnings before interest, tax, depreciation and amortisation) dropped 7.6 per cent, from $311.0 million in 2014 to $287.3 million this year.

However, the actual revenue was up 2.6 per cent. Below are the key metrics from Nine’s release. 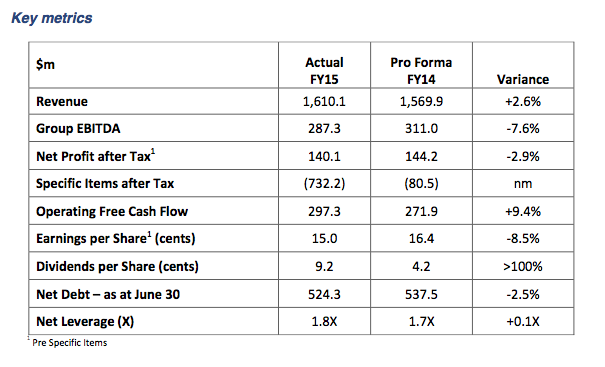 Of the results, Gyngell said: “In what has been a difficult Free-To-Air advertising market, our June quarter share performance was short of our expectations. However, we are pleased with our improving ratings performance trend over the first couple of months of FY16. ”

“Our recently announced NRL rights agreement is transformational for Nine,” continued Gyngell. “Together with our expectation of improved affiliate terms, the expiry of loss making international programming commitments, and our industry leading debt free balance sheet, we are in a very strong position. We are optimistic about the prospects for Nine as we continue the ongoing integration of our television and digital businesses, focussed on monetising the distribution of our premium video content in an evolving world.”

*A previous version of this article incorrectly said it was Nine’s half-year results. It was the full year results.