News Corp has reported a loss of US$1.4 billion for the 2018 financial year, driven mainly by US$998 million write-downs relating to the merger of Foxtel and Fox Sports Australia.

The loss is the second in as many fiscal years for the publishing giant, after posting a US$643 million negative effort in FY17.

However, the company’s total revenue rose 11 per cent to US$9.02 billion during the last financial year, thanks to strong growth for its digital real estate and book publishing segments, and the inclusion of Foxtel’s results.

Furthermore, News Corp’s expenses before interest, taxes, depreciation and amortisation rose 21 per cent to US$1.07 billion. 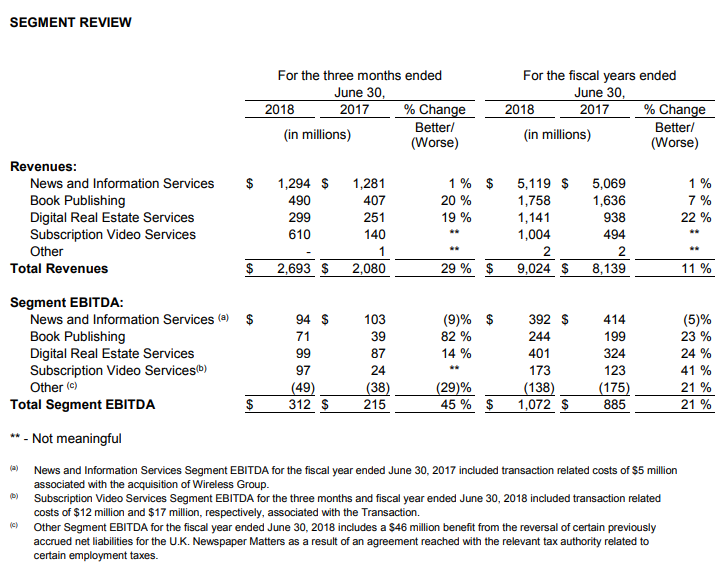 In its news and information services segment, News Corp’s advertising revenue fell by US$76 million (or three per cent) in FY18, while circulation and subscription revenue increased US$105 million (or five per cent).

News Corp Australia’s revenue rose just one per cent in the 12 months to 30 June 2018, while REA Group increased its revenue by 27 per cent to US$666 million.

Robert Thomson, CEO of News Corp, described FY18 as a year of “operational and transformational success” for the company.

“We generated strong revenue and segment EBITDA growth in the digital real estate services and book publishing segments which, together with the consolidation of Foxtel, drove over US$1 billion in profitability for the year,” he said.

“News Corp is now a more substantial company after the Foxtel transaction, with a much higher percentage of recurring, subscription-based revenues, which should help offset a volatile advertising environment.