Advertise with us
Posted 4 February, 2019


M&C Saatchi Sydney has released its first campaign for John Boston craft beer that taps into the unexpected legend behind the man that inspired the drop.

John Boston, a jack of all trades, master of none, landed on Australian shores more than 200 years ago. He crafted Australia’s first beer in 1796 using corn, bittered with love-apple stalks, but when it failed the taste test of local guards in Old Sydney Town, Boston jumped ship to America. Sadly, he never made it, eaten by cannibals somewhere in the South Pacific. 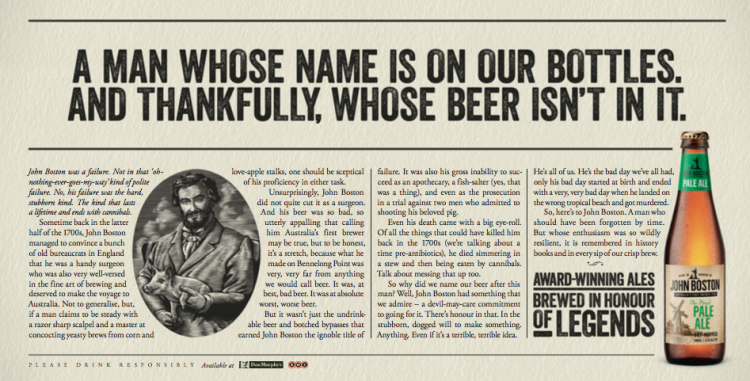 Unlike Boston, his beer, an award-winning, easy drinking craft beer, lives on today. However, much like John, the beer had little brand awareness. In order to get people drinking and sharing it proudly, the team at M&C Saatchi has created an unexpected campaign that celebrates the fact John Boston beer tastes amazing, and according to cannibals, so did John Boston.

The platform, ‘Brewed in honour of legends’, remembers the harebrained ideas, the silly failures and, most importantly, the spirit of the great man to carry on. The campaign introduces the legend of John Boston with the platform offering the flexibility to celebrate other unexpected legends.

The aesthetic of the work is reflective of the era in which John Boston lived, using wood etched illustrations and long-form typography as well as a cheeky, Aussie vernacular.

Cam Blackley, chief creative officer, said: “John Boston’s story is about as outrageous as it is unknown. We know that he was among the first brewers in Australia and that his original beer was eye-wateringly bad.

“In fact, we know that the man failed at everything he did except dying in an incredibly interesting way. But he had this quality that is hard not to admire – he got back up and tried again every single time. This campaign is about celebrating a legend and the quality beer that remembers his gumption.”

Rachel Hofman, marketing manager at Pinnacle Drinks, said: “The goal of the campaign is to celebrate John Boston the man who started it all but also to recognise the classic Australian spirit of getting back up and having a crack despite failure.

The campaign is led by out-of-home posters on train station platforms that detail the journey of the man who inspired the beer, supported by digital out-of-home and social.