Blockchain is undoubtedly marketing’s buzzword for 2018. But if the mere word strikes fear into you, Orange Line’s SEO expert, Govind Thanabalasingam (pictured below), is here to spell things out in simple terms. In this guest post, he explains what you need to know and why blockchain’s about to change everything…

Blockchain has the ability to disrupt many industries and the digital marketing industry is no exception. There are already various startups utilising blockchain technology to empower advertisers, publishers and consumers. But this may not be great news for the middlemen, which includes media giants such as Google. 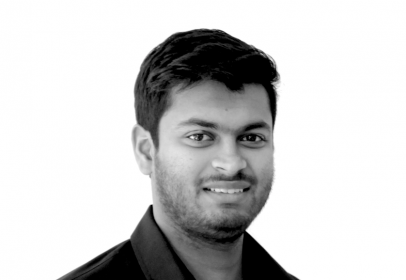 The first thing many think of when they hear blockchain, is Bitcoin. It makes sense, as blockchain was created by the mysterious Bitcoin designer, Satoshi Nakamoto.

How does blockchain work?

– Person A wants to create a transaction with Person B.

– The transaction will be sent online as a ‘block’.

– The block is then broadcast to every party within the network.

– All the parties within the network approve that it is a valid transaction — this is known as the Nakamoto Consensus.

– The block is then added to the chain, which creates a reliable and transparent record of the transaction.

– The transaction has completely been moved from Person A to Person B.

Blockchain eradicates the need for centralisation. Its security is far superior than a centralised platform or data structure, as it would require someone to hack through millions of devices within the network.

How can blockchain be applied to online advertising?

Cutting out the middleman

As everything is like a self-governed network for the financial industry, this cuts out the banks who are the middlemen.

Blockchain has the ability to eliminate them all, which enables publishers to earn more and advertisers to spend less.

Although there are various tracking tools and software, when it comes down to fraudulent clicks, fighting bots and click farms has always been hard for digital marketers and advertisers — especially in programmatic.

Statistics show that in 2017, ad fraud cost close to $16.4 billion globally. By harnessing blockchain technology, advertisers would be able to see whether the impressions and clicks that they are serving, are being delivered and engaged with by the correct target audience, rather than bots or someone working for a click farm. AdChain is an interesting ICO (Initial Coin Offering), which aims to tackle secure impression tracking with blockchain. ICO’s are used to fund projects – that would usually utilise blockchain technology – by selling their crypto tokens. In essence, an ICO acts like an IPO (Initial Public Offering).

Targeting on another level

Digital marketers and advertisers have always had the ability to obtain data about their target audience from age and gender to annual income and even their level of education. With blockchain, advertisers would be able to gather that data and create individual consumer profiles, allowing for advertisers to deliver even more relevant information to their target consumers.

Transparency for advertisers, publishers and consumers

Programmatic trading agencies have always been scrutinised for their shady buying and selling rates. The blockchain can solve issues such as these, as it would create more transparency in media buying and selling by recording everything on the digital ledger.

Transparency would also increase for consumers. Imagine purchasing an expensive watch, only to find out that it is a counterfeit. What about purchasing edible products, such as chocolates or supplements, and then finding out that the product had expired days ago. Blockchain creates complete transparency across products, as it can be applied to the supply chains. This allows consumers to see where a product was manufactured and where it had travelled. Wabi is another ICO which aims to solve issues such as these by placing secure, anti-counterfeit labels on consumer products in China and internationally, then utilising the blockchain technology to track them accordingly.

While still in its relative infancy, blockchain is a transformative technology that brings with it security, transparency, efficiency and performance. As questions still abound over transparency in the media, it has the potential to be a major disrupting force within the digital marketing industry and one that all players – both large and small – need to be alerted to.