It also won the seal of approval from Aussie consumers who have overwhelmingly voted pineapple an acceptable ingredient in the popular menu item. 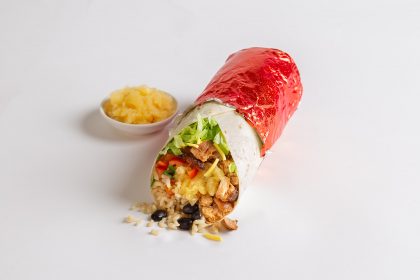 The tropical addition came after National Burrito Day, in April, when Mad Mex asked its customers via social media what they’d like to add to its best-selling burrito.

A majority of customers requested pineapple so Mad Mex responded with the special edition burrito.

The campaign was created to raise awareness of Mad Mex and align with its new Fresh Fuel for Life brand positioning which promotes delicious, fresh, natural food for real people on the go.

Nearly 4000 people have already cast their votes for or against the contentious fruit addition via Mad Mex’s specially created Facebook chat bot with 2864 people voting “Heck Yes” and 1111 “Hell No!”.

With just a few days left to run on the promotion, it would seem that Pineapple is heading for a landslide victory that will leave the mighty fruit well and truly wearing the crown!

The coordinated communications approach saw Mad Mex internal and external teams working together to create the product and the mini campaign.

A travel voucher competition was set up to capture customer information.

The digital team created a new Facebook chat bot as a mechanism for entry and a comprehensive PR effort drove awareness across the board.

Additionally, curated content from Yahoo7! and a range of influencers helped amplify the communications efforts and reach.

The PR and social media around the release of the Pineapple Burrito sparked heated online conversations and furious media debate.

It even made world headlines with Fox News in the US suggesting that the Aussie restaurant chain had “taken things too far” by creating the new menu item!

PR generated a reach of over 15+ million and drove heated debate online.

This has resulted in over 4000 individual interactions to date with a 99.6 per cent message open rate.

100 per cent of people read the message they received and 90.6 per cent then clicked through for more information.

25 per cent of people clicked directly through to download the Los Locos loyalty app and 33 per cent invited one of more friends to interact with the campaign.

The social campaign connected with thousands of Aussie amigos – many of whom had never engaged with the brand before.

And everyone who voted is now a subscriber to Mad Mex, opening up the potential re-market to them via direct Facebook messages.

As a result of this activity, Mad Mex saw an uptick in sign-ups to its popular Los Locos loyalty app over the course of the promotion.

The campaign generated some extreme reactions from fans too.

Pineapple-lovers  went straight into bat for their team voicing their support for the fruit’s addition to the menu via social media, but they were faced with irate pushback from the “Hell No” camp:

One angry customer wrote: “The humiliation of having pineapple on pizza was already the worst thing civilisation was exposed to.

“Trying to sweeten the Mexican cuisine by introducing pineapple as an ingredient will cause an upset to the world more shocking than the Kardashians’ family dramas.”

But Team Pineapple fought back with one Mad Mex customer claiming that Pineapple could heal the world!

“Pineapple belongs on everything! Pineapple is the answer to all the worlds’ problems!” raved the fan.

Sadly they didn’t indicate which tune it should be sung to.

“We said we wanted to settle the argument once and for all and that’s exactly what the Pineapple Burrito has done!

“We are delighted with the results.

“What started out as a bit of fun – in line without brand values – has created some great outcomes. This is a truly fan-driven initiative.

“We always listen to our amigos and it’s their input that has created this product.

“When we launched it as a limited edition item, we said that if it was popular this might not be the last we see of it on the menu… so watch this space!”

With the Pineapple Burrito still available in Mad Mex stores until June 30, fans can still enjoy the controversial dish.

They can also still have a say in the Pineapple debate by voting “Heck Yes” or “Hell No” by June 30 via the Mad Mex Facebook page to get a chance of winning  a $2000 travel voucher that could take them to tropical climes!