Don’t fear Russian nuclear submarines and a nuclear catastrophe; something far, far worse could happen – your internet connection’s about to be cut off (without it even being Telstra’s fault.)

According to a report in The New York Times, Russian spy ships and submarines have been spotted acting rather suspiciously around underwater internet cables in the North Sea, north-east Asia and even the American coast.

US military intelligence officials suspect just one thing – they could sever the world’s internet cables in the event of some sort of diplomatic crisis and enter the globe into some new form of digital Cold War.

There are no reports that Australian sea channels have been targeted, however, as many servers are held in Europe and the US it would still be a catastrophe for we Aussies too.

The NYT reports that the issue is attracting considerable interest in the US Department of Defence.

Commander William Marks, a US Navy spokesman, was quoted in The NYT as saying: “It would be a concern to hear any country was tampering with communication cables. However, due to the classified nature of submarine operations, we do not discuss specifics.”

Rear Admiral Frederick Roegge, commander of the US Navy’s Pacific submarine fleet, said: “I’m worried every day about what the Russians may be doing.” 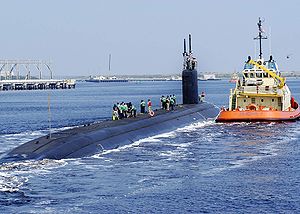 Not that the Americans are entirely innocent of these sorts of things themselves. One of the most top secret subs in its arsenal is the USS Jimmy Carter (pictured above). A nuclear-powered – but reportedly unarmed – behemoth whose sole job it is is to spy on other nations and tap into internet underwater cables.

It’s alleged the sub had been tapping into Chinese underwater internet cables – stealing masses of classified information – for years before the Chinese government finally cottoned-on and, as you could imagine, was none too impressed.