Royal Bank Of Scotland’s (RBS) head of analytics Giles Richardson has told the audience of the Adobe Summit in Las Vegas how he harnessed the power of Superstar DJs to transform the bank’s digital organisation.

In a highly entertaining 20-minute presentation, Richardson (seriously rocking a wonderful pair of red trousers) explained how by channelling the merits of a good DJ, his organisation was able to completely transform the way it used data. And by using a slew of Adobe Marketing Cloud products as well of course.

Richardson said the 300-year-old institution has 25 million customers around the world and assets of $1.5 trillion, the equivalent of “little regional bank in America”. He also said it sports the Queen as a customer. He also joked that one of the bank’s brands – Coutts – had as its motto: “Separating the properly rich from the merely wealthy.”

He also said the RBS’ “were terrible! We’d just decide to launch a new product and then 10 minutes later we’d get an email from the CEO saying congratulations guys this takes us closer to our strategic aims . . . Had it? In truth we didn’t know.”

He then pointed to the law of digital which insists that 80% of everything you do online doesn’t work in the way that you think that it would. So he suggested that the things they were doing was probably making it worse.

Being a proud analyst, Richardson said that the business insisted that they needed reports from the analytics team produced regularly but “to be honest we didn’t really think that anyone was reading them. So stuff started to go in there.” 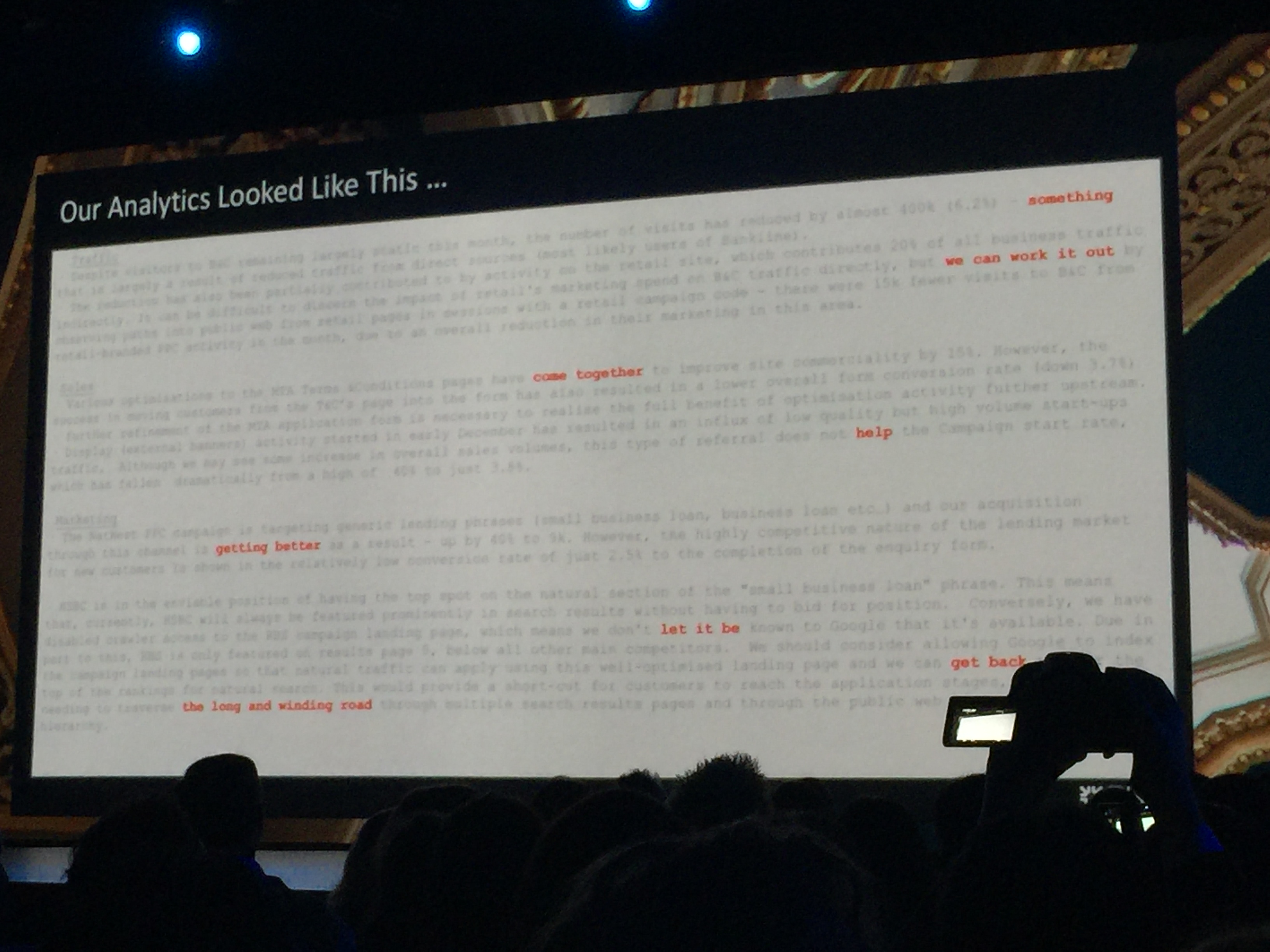 “Clearly things needed to change. We were just doing stuff, we didn’t know whether it worked or not. Data was a sideshow. So we needed a new vision. We needed to become Superstar DJs,” he said.

DJs are amazing things, Richardson suggested. “They’re constantly creating new content, in their case it’s music, and they push it out all the time. Within milliseconds they know if it’s working or not, and they pull it back if it’s not.

“They’re very, very cognitive of audiences. They know the Tokyo crowd is very different from the London crowd, which is different to the Vegas crowd.

“DJs know if what they’re playing is working – constantly reinvent. They also do it all themselves. So actually we loved this. We wanted our digital team to become super star DJs.”

Using Adobe Experience Manager and Adobe Analytics, Richardson’s team started to democratise the data – get it out there. He said having a separate group of people in the corner of the room was not useful, but the data analysis had to be done by everyone within the business.

So how do you get people to look at data? You have to make it fun, he said.

Richardson really amped up the DJ analogy and when people qualified as a superstar DJ they got a set of Beats headphones and a range of other fun and encouraging gags.

The result was that they weren’t forcing people to use data and analytics, but were enabling them. Everyone in the organisation started playing with the data.

“Now no new content goes on any of the RBS websites without it being tested in real time first,” he said.

The results was a dramatic increase in the optimisation of the bank’s the digital experience. 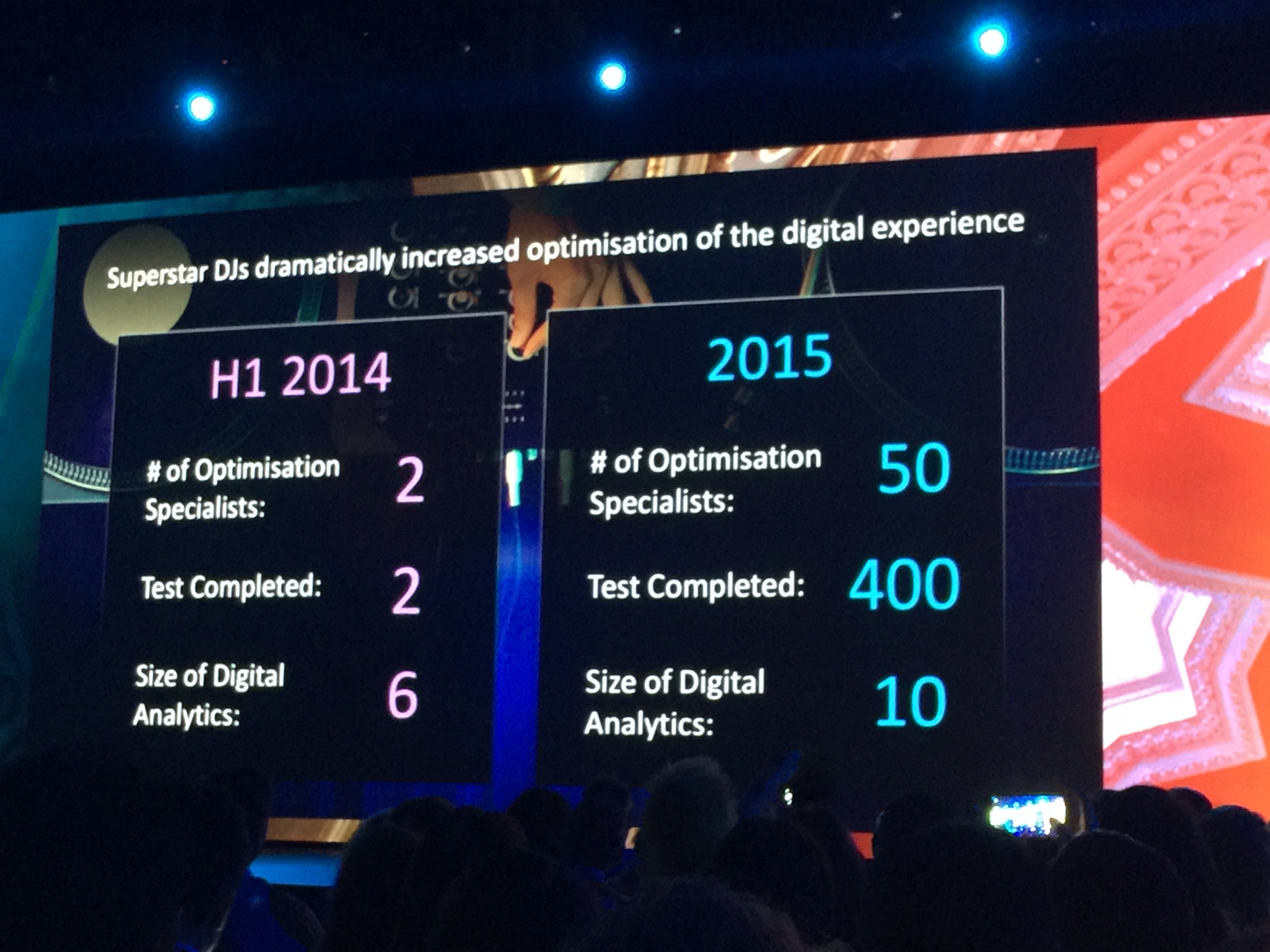 Interestingly, one of the key findings from the optimisation was that the power of loss was much more impactful than the power of gain. So any offers the bank put out that used a “missing out” statement rather than a “stand to gain” statement was far more effective.