The AFL has altered its famous logo at its Docklands HQ to read ‘Yes’ in a show of support for marriage equality, only to take it down 12 hours later after a fan backlash.

A long-time supporter of same-sex marriage, the AFL changed the logo late on Tuesday evening only to take it down yesterday afternoon. There had even been unverified media reports that the sign had been vandalised. 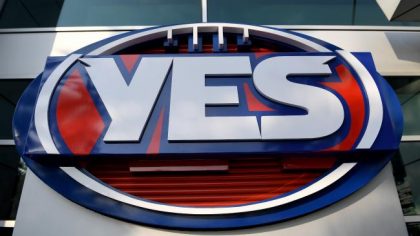 And not everybody was happy with the move. The Carlton Blues found themselves in strife with its fans after it refused to endorse the AFL’s stance.

Apparently, the Blues declared themselves to be a “leader in engendering equality” but fell short of recommending a ‘yes’ vote. This infuriated fans who threatened to cancel their membership to the club.

Only the Western Bulldogs, North Melbourne, Collingwood, Sydney and St Kilda have publicly pledged their support for same-sex marriage.

Interestingly, a current poll on Fox Sports, that has garnered 7,600 votes, has a 64 per cent disproval of the AFL’s public stance.

Other sports including the ARU, the NRL, Cricket Australia and Football Federation Australia have all thrown their support behind the ‘yes’ campaign.

However, some have argued in favour of Carlton’s stance saying that marriage equality is a personal matter and that clubs should not speak for their fans.

Premiership-winning coach Mick Malthouse was one who opposed the AFL’s stance. “The AFL will only polarise people and really has no right to be involved in the political world of marriage equality,” he said.

Collingwood great Tony Shaw added: “I’m not voting because we elected our politicians to make hard decisions and they haven’t got the guts to do it. If I was going to vote, I’d vote yes, it wouldn’t worry me, but I’m not voting.”

“I don’t go the football to be lectured on issues like same-sex marriage, the republic or any other number of trendy issues the AFL or other clubs want to support.

“So I support Carlton in saying it is an individual decision and just leaving it at that. The AFL is on the wrong horse with this one,” he said.