In this opinion piece, CEO and founder of sb FLOURISH Jessica Sullivan wonders if Facebook’s latest emotive buttons have considered the needs of both its free users and advertisers.

For years now, social media enthusiasts have been calling for a social media app that makes sharing our emotional motivations to share content as simple as sharing the content itself.

Clicking the ‘like’ button sure is simple, but is horribly inadequate at sharing the complexity of human emotions, and the drivers for engaging with our friends and loved ones.   Clicking ‘like’ when what you feel loss, confusion, outrage or irony is, well…. insulting to our humanity at best.

To Facebook’s credit, you can imagine what it would have taken for their researchers to critique the like button?

The challenge speaks volumes for an organisation able to be such honest social media listeners.

Yes, it has taken Facebook a few years to respond but there was a lot at stake. Their approach to the issue has shown their culture is still innovative and able to question the very things that made them so successful in the first place.

It’s pleasing from a culture perspective, but while Facebook has methodically managed the process of disruptive innovation, did they overcome the challenge of balancing their free user’s needs with paid users (advertisers)?

To help solve the problem Facebook involved a variety of experts from different fields including animators, researchers in the field of psychology and sociology, and of course engineers, all with a deep knowledge of the problem.  In the ideal situation this process helps a business to understand the practical limitations and minimal requirements of the problem’s solutions.

Maintaining the like button in the process was unquestionable for Facebook. Successful brands maintain consistency in their approach to solving problems.  In this case Facebook’s reputation for developing the like button had to be protected and billions of users, the majority traditionalists didn’t need to be affected by changes.

Successful businesses in technology with multiple users don’t just focus on solving problems from one user’s perspective (in this case free users of Facebook).

Facebook’s biggest challenge was balancing free user’s needs with an innovative solution that could generate revenue from their paid users (advertisers). 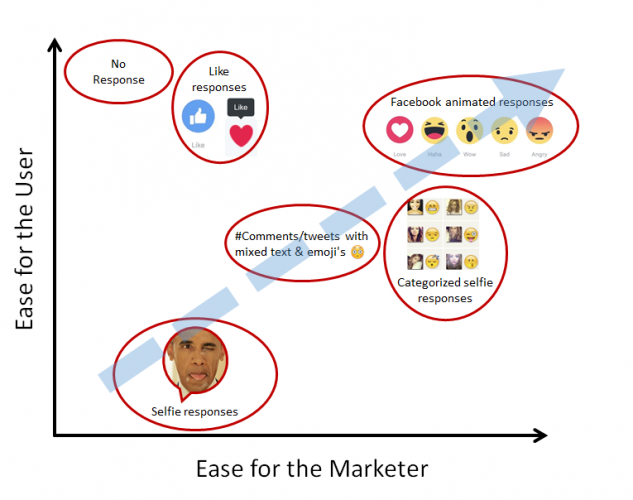 So why did Facebook choose emoticons and only five emotional reactions?

Emoji’s are taking off in marketing. Leading brands like Taco Bell have successfully introduced their own Taco emoji. Kim Kardashian also recently released a signature series of her own emoji.

Facebook recognised this trend some time ago partnering with Pixar to develop their own emoji and users have given Facebook researchers plenty of data to analyse about their love for them.  Over the last year or so Facebook users have been given more emoji than they have ever needed to use in comments.

However, the decision behind the number of emoji to be included in the reaction buttons was very different.  A limited number of options would not only help free users to adjust to the new feature more seamlessly but also enable the digital extraction of the emotional response for Facebook to monetise.

Sure if users were able to select from the entire emoji suite there would be more meaning and emotional complexity involved in reactions, but the issue is that for the platform you can’t monetise it, unless categorised through some smart and easy to use user experience.

Facebook has nailed the user experience on this one. They will however hear users asking for more of their favourite emoji to be included in the reaction buttons.

You could ask why people’s real faces haven’t been used in the solution.  Part of the reason is ‘why reinvent the wheel’ but the primary reason is that it would be difficult to monetise the data.  Facial recognition technology is advancing but not enough so an ultra smart user experience design would be required to categorise data from these images.

Advertisers with bigger spends have sophisticated testing platforms that measure the behavioural impact of their social media content but many smaller to medium advertisers are still boosting posts. These advertisers will be able to more easily gauge which posts to boost and how their audience feels about their content across several helpful categories – love, haha, wow, sad and angry.

There isn’t really much a page manager or advertiser can do with ‘meh’ is there?

Now that Facebook can match content to several different emotional categories, for the first time ever, they could build a more human algorithm for their search engine.

This could be a fun search tool enabling free users to search for content based on both keywords, hashtags plus emotion.

Are Facebook’s new reaction buttons paving the way for a more human search algorithm, allowing members for the first time to be able to search for content by human’s emotional response?

This is also a win for advertisers. In the future, paid users will be able to target their advertisements between content related to positive sentiment (‘haha’, ‘wow’ and ‘love’) and avoid appearing alongside content with negative sentiment (‘sad’ or ‘angry’) a pain point Facebook advertisers have had to endure for some time.

Has Facebook pulled off delivering the old one two birds with one stone?

Facebook is trying to do two things at the same time. Have they managed to kill two birds with one stone or are they compromising free users for the benefit of advertisers?  If they didn’t have to focus on the paid users would they have come up with something different?

The decision on which service Facebook should prioritise is the challenge the social media giant is juggling.