While the digital world may have ratcheted-up customers’ expectations to an unsustainable level, customers still live in the physical world the Daze of Disruption roundtable of industry heavyweights has heard.

Brought together by Oracle Marketing Cloud in Sydney recently as part of Daze of Disruption, marketers from some of Australia’s most prestigious retailers were joined by a select group of senior attendees to discuss their experiences of Australia’s marketing dilemma. 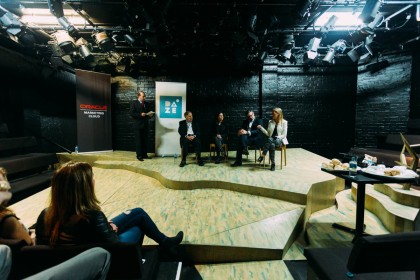 Hosted by Which-50’s Andrew Birmingham who put to the panel that the modern day customer’s “minimum expectation is the very best experience someone has ever had. It’s an impossible benchmark to achieve. How rapidly are customer experiences ratcheting up?”

Bear in mind, David Jones is a store where it’s flagship Sydney store has shoppers treated to an octogenarian tickling a grand piano and they can expect a top-hatted gent to literally open the front door for them. McDermott, who’s been with DJs for years but describes the experience of the past nine months since being bought by South African retailer Woolworths as “highly invigorating”, says the in-store experience is “retail theatre”.

She adds that she and the retailer’s CEO Ian Nairn regularly walk the retail floor during their meetings, observing customer interactions all the while.

But while such “event shopping” experiences are being increasingly recognised as a key component of the retail mix, particularly for luxury brands, a battle is raging in the ecommerce world and in delivering a unified customer experience. Perhaps DJs could add some piano music to their online experience?

But while DJs may well be doing it well, there’s something of a chasm between Australia’s best retailers and the rest of the pack.

For Oracle’s Hyland “there is a massive sense of urgency because of that disparity”.

Part of the problem, he says, is that Australia was protected by geography for quite a long time, but that this was no longer the case. What this means, of course, is that it’s easy for Australian retailers to see what’s worked overseas and “cherry-pick”. This, however, argues Hyland is where the chance to truly understand your customers is lost.

“The common starting process is customer and then the process. Test and validated takes time and so the clock is ticking. If we try and take the low hanging fruit from what works overseas and try and plug it in, then you miss the journey, which is how you learn,” he said.

And learning about industry nuances is something that Victoria Morgan, general manager marketing and digital APG & Co, knows a thing or two about.

As the manager of four well known Australian fashion brands – Saba, Sportscraft, Jag and Willow – Morgan has learnt that what works for Saba, for instance, may not have any impact with Sportscraft.

“For two of the brands, [free shipping] makes a huge difference and for two of the others it didn’t, so that’s why you need to do variance testing with everything,” she said.

EDMs (email direct marketing) can produce varied results depending on the individual catalogues they are used with, she said. Morgan also says APG & Co uses focus groups, which are in themselves challenged, but the picture becomes clearer incrementally.

“What customers say versus what they do is a challenge, but you’ve got to be as scientific as possible. Have a hypothesis and then see how the experiment pans out,” she adds.

DJ’s McDermott said that, “Nike actually sit in the customers’ bedroom and try to understand the business”. By this she means that Nike actually just recreated a bedroom of their customers down to the last detail, not that they carried out a series of home invasions.

“Nike has always been obsessed with the customer so it didn’t matter that they were late to digital,” she said.

Oracle’s Hyland adds: “If you switch to a scientific mindset then you’re okay because when you fail you learn.”

Morgan adds that APG & Co has brought its data in-house “so we can interrogate it more thoroughly”.

By analysing data points such as recency, frequency and value, brands are now able to go after genuinely valuable clients and single them out for preferential and profitable treatment.