The recent front cover of The Daily Telegraph has copped a Twitter beat down after it accused schools of brainwashing students with ‘gay propaganda’.

To celebrate Wear It Purple Day, an annual event to combat bullying against young LGBTI people in schools on August 28th, Burwood Girls High School planned a screening of the recent documentary about Aussie kids with same-sex parents Gayby Baby. 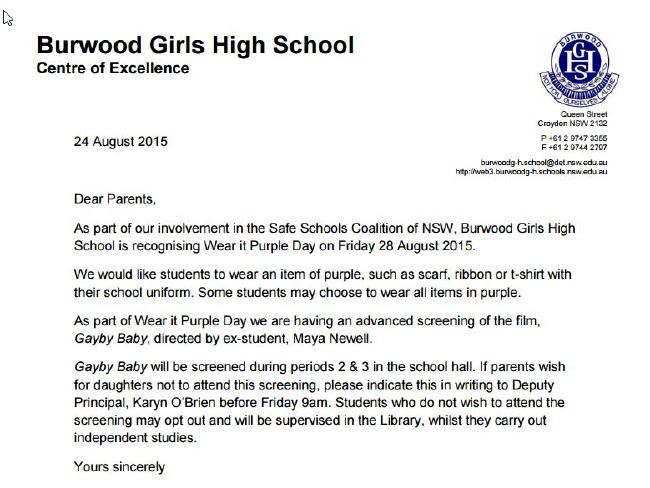 The front page of The Daily Tele said that parents were ‘outraged’ that their kids were being subjected to the screening of the doco:

The Tele also included Piers Akerman’s article titled “Gay Push Should Be Kept Out Of Schools” which featured the photo below. Akerman’s article attacks the “fantasy that homosexual families are the norm” and accuses the Burwood Girls High principal Mia Kumar of “embracing political propagandists who have seized her school’s agenda.” 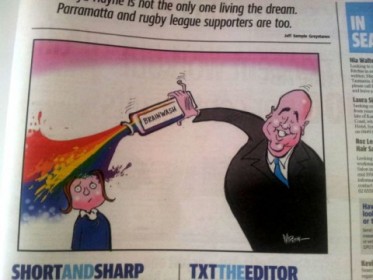 Following The Daily Telegraph‘s front page the NSW government banned schools from screening Gayby Baby. The NSW Education Minister Adrian Piccoli said NSW schools will not be showing the film during school hours to “avoid students missing out on class”.

NSW Premier Mike Baird said: “I understand the intent of that is to provide an example of tolerance and that’s something I absolutely support. Should it be in class time? No, I don’t think so. Should it be optional? Yes, I do think so.”

Twitter has been heaping its anger onto The Daily Telegraph and the NSW government:

Things I watched in high school that made me gay: – Pride and Prejudice – Frontline – 10 Things I Hate About You – other girls

Next time someone tells you religious freedom is under threat, remember – #GaybyBaby = banned by the state, scripture = protected by law — Michael Koziol (@michaelkoziol) August 26, 2015

How sad that a film about real kids and their families is attacked. So quick to bully, so unwilling to listen. #GaybyBaby — Senator Penny Wong (@SenatorWong) August 25, 2015

NSW Government has caved to a tabloid beat up and banned a film about tolerance #shameful #gaybyBaby http://t.co/pwCBfyfgfT — Chris Stevenson (@chris_stevenson) August 26, 2015

What if we all bought copies of Gayby Baby and made the delivery address The Daily Telegraph’s office on Holt St? — Osman Faruqi (@oz_f) August 26, 2015

The kids at my son’s school watched Gayby Baby two weeks ago. All of them have since turned into lesbians http://t.co/JnrU9uo169 — Catherine Deveny (@CatherineDeveny) August 26, 2015

The front cover of the @dailytelegraph with a story where people claim kids can be turned gay by a movie. Seriously?! http://t.co/Ciols9ce3g — Scott Dawkins (@dawkins_scott) August 25, 2015

Our national leaders could learn from these school leaders. The future is bright, that’s what matters. #gaybybaby pic.twitter.com/7Pg4dJ0SQf — Peter van Onselen (@vanOnselenP) August 26, 2015

Film-maker of #gabybaby Maya Newell “the front-page of the #DailyTelegraph gave me a sinking feeling” on @2ser LISTEN http://t.co/ajWfE2PF2C

The Department of Education has conceded that they hadn’t received any complaints from parents or teachers about Gayby Baby being shown at the school.