In this extract from his latest book Work with Me: How to get people to buy into your idea, marketing collaboration expert Simon Dowling (pictured below) says, you’ve got to get the customer in the car if you want them to buy it…

Actor and comic Will Rogers once said, “There are three kinds of men. The ones that learn by readin’. The few who learn by observation. The rest of them have to pee on the electric fence for themselves.” 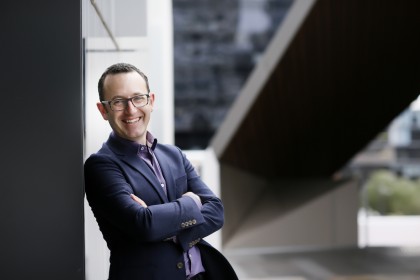 To build buy-in effectively, you often have to let your audience come into contact with the electric fence. That is, let them experience the problem that your idea will solve, or the opportunity you’re proposing. This is what I call ‘zapping’ your audience.

Car salespeople know this when they get you into a car as quickly as possible; auctioneers tap into this when they run an auction in front of the house they’re selling. Steve Jobs was famous for his live demonstrations of new products on stage, so the audience could experience the new Apple product. Apple’s worldwide retail outlets are designed in the same way, giving customers the chance to be ‘hands on’ with each and every product.

If a picture is worth a thousand words, a firsthand experience can tell the whole story. A client of mine used this to her advantage when she had to transform the large bank she worked at into an activity-based workplace. The whole idea of an active workspace is that you move desks every day, so when the initiative was first announced, most staff reacted negatively to the idea they would no longer have a desk and chair (let alone their wall of dog photos). To address this, a simulation centre was set up where team members could spend a week experiencing the method first-hand. The reaction after a few days was, ‘You know, that wasn’t so bad after all.’

Letting people get ‘zapped’ shows you are confident and honest. If you give your audience the chance to experience the real thing before making a decision, you’re effectively saying, ‘Don’t take my word for it. Come and see for yourself. If you don’t like, don’t buy-in.’ And who can argue with that?

If you don’t have the luxury of a hands-on experience, try other ways to simulate the real thing. Luke, the manager of a sales team, had been trying to get his team to attend a series of lunch-and-learn sessions that he’d coordinated, the aim of which was for participants to exchange learning experiences with one another. But as much as he tried, Luke struggled to get people to attend. Digging deep, Luke decided it was time to ‘zap’ his team.

One Monday afternoon, as the team prepared for its weekly sales meeting, Luke set up the meeting room to resemble the set of a game show. As the last of the team members arrived, Luke declared, ‘Let’s play!’ He immediately described a customer situation and asked two of the team to step up and role play how the conversation could unfold, while inviting some of the other team members to act as the judging panel (complete with scorecards a la Dancing with the Stars).

The game was a lot of fun, but it also proved to be a clever strategy for building buy-in, because it gave people the opportunity to see the kinds of things that their colleagues were doing, and also to feel the pain of realising they didn’t have the best answer for every situation. Attendance at Luke’s lunch-and-learn sessions skyrocketed.