Coles is bringing back its ‘Little Shop’ miniatures campaign just in time for Christmas.

The announcement comes just a week after Woolworths announced the launch of a “100 per cent Aussie made and fully recyclable” cardboard Christmas collectables campaign. 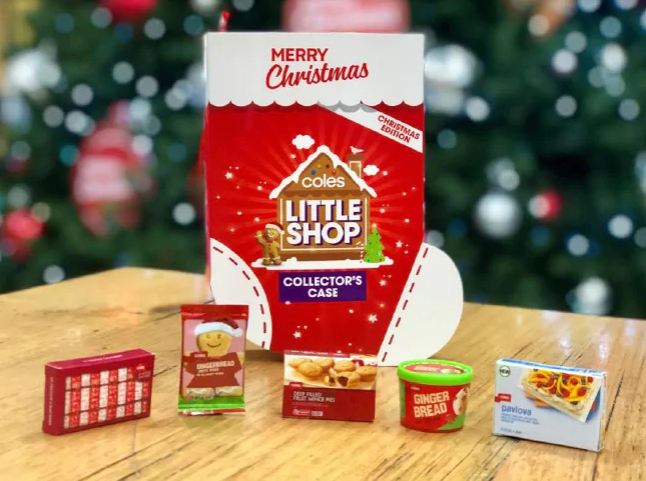 Speaking on the launch, a Coles spokesperson said: “We were blown away with customer feedback to Little Shop when it launched in July this year so we wanted to bring customers a little extra as a surprise this Christmas.”

“Customers will receive one free Christmas mini collectable for every $30 they spend in store from December 7,” the spokesman said.

“There will also be a limited number of special-edition Christmas stocking collector cases available for purchase for $4.”

The news is making waves across Australia, as while the initial ‘Little Shop’ rollout was highly contentious given they debuted the same week as Coles announced a plastic ban bag, the campaign led to the supermarket’s strongest quarterly sales growth in two years.

They're just in time for Christmas… Coles has announced it will release 5 special edition "Little Shop" items next week. @Zara_James9 #9News pic.twitter.com/YY6dZMnhQ9

When Woolworths announced its Collectables launch, the supermarket made a point of highlighting the environmentally friendly nature of its rollout.

Woolworths said in its press release launching the range: “Simply ‘pop-out’ the character from the cardboard frame and use the instructions at the bottom of the board to build them.

“Three characters will be released each week, for the next four weeks.

“‘Woolworths Christmas Pop-Outs’, available from this Wednesday (14 November) will feature 12 Christmas-themed buildable cardboard characters, to be offered to customers as a festive gift, with every $30 they spend on eligible purchases in-store or online.

“Characters include all your Christmas favourites such as Santa, Reindeer, Elves, Gingerbread Man, Snowman and more, with the range proudly Australian made and fully recyclable.

In a not-so-subtle dig at Coles, the statement adds: “Customers will also be able to see what they are getting as the ‘Woolworths Christmas Pop-Outs’ will not come in ‘blind plastic bags’ to help avoid duplication or disappointment and minimise waste.”