Coca-Cola in Hungary has decided to get with the times, unveiling a new outdoor and social media campaign featuring same-sex couples.

However, not everyone’s happy about it with conservative elements in the country calling for a boycott of the fabled sugary drink. 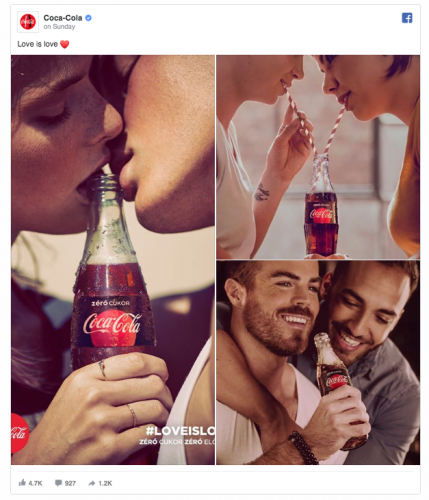 Supporters of the country’s ruling conservative nationalist Fidesz party led the chorus for a nationwide Coke ban, alongside many in the country’s right-leaning press.

An online petition had received 25,000 signatures endorsing the boycott.

“The homosexual lobby is laying siege to Budapest, leaving no space to avoid this,” wrote one columnist in a local newspaper.

While homosexuality has been decriminalised in Hungary, same-sex marriage is still banned.

A 2017 poll by the International Lesbian, Gay, Bisexual, Trans and Intersex Association showed over 60 per cent Hungarians believe equal rights should be afforded to everyone, regardless of sexual orientation.

For its part, Coke has backed the campaign. A spokesperson saying: “The three different posters feature both hetero- and homosexual couples drinking Coca-Cola,” a statement from the company read.

“With this we really want to convey a message: our belief that everyone has the right to affection and love; that the feeling of love is the same (#loveislove). Many advertisements – not just Coca-Cola’s – divide people’s opinions: some like them, some do not. Of course we respect the opinions of others that differ from our own.

“We believe that we are all equal, irrespective of our nationality, religion, gender, age, ethnic background, spoken language, hobbies and opinions. We believe that both hetero- and homosexuals have the right to love the person who is best for them.”