Advertise with us
Posted 1 November, 2017


DrinkWise and Clemenger BBDO Melbourne have launched Ghost with Uber, a new campaign in partnership with Uber which aims to help people avoid the peer pressure to keep drinking when all they want to do is call it a night.

In the past, many admirable ‘ghosting’ attempts – the ‘fine art’ of sneaking out of pub, club or party unnoticed – were ruined by a lack of available transport on exit. The new ghosting mode on the Uber app, running on Friday and Saturday nights for the next six weeks, allows ‘ghosters’ to send a custom message to friends letting them know they’ve slid right by them to a safe ride home. 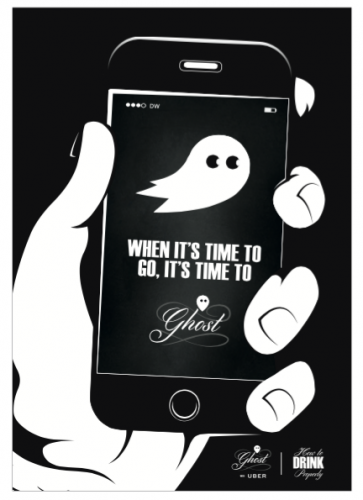 ‘Ghost with Uber’ is based on the insight that people often feel compelled, against their better judgement, to keep drinking and this practical approach from DrinkWise helps discourage bingeing, allowing people to get home safely from a night out.

Simon Strahan, marketing director at DrinkWise, said: “You should always look out for your friends, but if they’re urging you to keep drinking when you’ve had enough, it’s time to ghost. Our partnership with Uber is about reducing the pressure to drink to excess and providing a safe exit.”

“‘Ghosting’, ‘smoke-bombing’ and ‘phantoming’ are all part of modern vernacular – a lot of people are self-claimed experts at it. The advantage of Ghost with Uber is that it allows you to message friends after leaving, complete with Uber map view of you being driven away – the ultimate ‘ghost’.”

Henry Greenacre, head of cities at Uber Australia and New Zealand, said: “After working together on impactful campaigns in 2016, Uber is proud to once again partner with DrinkWise to help Australians make smarter decisions when drinking. We know peer pressure has a real influence on drinking behaviour, and the Ghost with Uber campaign aims to highlight this and some easy ways to avoid it.”

Clemenger BBDO Melbourne’s CEO, Nick Garrett added, “It’s fantastic to be able to partner with both DrinkWise and Uber in a bid to break down social barriers and influence behavioural change through a fun and engaging campaign that carries an important message.”

The campaign will launch with out of home, social and digital activity, street posters, PR and influencer activity and via radio duo, Hamish and Andy on their Fox FM drive show, in addition to the Uber app on Friday 3 November, for six weeks.