Be warned – if sales of the stuff in the US are any indication then canned wine is set to be the next big thing among Millennial drinkers.

Just released Nielsen data has reported a 125.2 per cent growth in the category YOY in the US, albeit from a small base.

And why has plonk in a can suddenly become cool? It’s all the Millennials’ fault, apparently. As we know, the Ys don’t want possessions they want experiences (and bad hangovers if they’re skolling this stuff). Experts say that canned wine is easy and immediate and doesn’t require the Ys to store wine in a rack, nor worry about things like owning wine glasses or bottle openers.

It’s also believed that wine is seen as a healthier alcohol choice over things like beer and spirits. Ys, too, aren’t so interested in things like year, grape or region when it comes to wine. 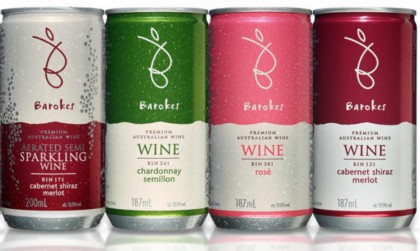 And a version of canned wine is already available in Australia. A company called Barokes has been selling a canned wine for a number of years; however, it appears to have had more success overseas than it has had locally.

Canned wine is regularly sold in four-packs in the US, which the Ys like to grab before doing Y-like activities such as hiking, camping and picnicing.

When it comes to advertising canned plonk, US marketers often use imagery showing the product as cool while showing traditional wine drinkers as old, stuffy cardigan wearers. The category regularly targets men who may askew buying wine in a bottle and typically drink beer. One of the biggest selling canned wines in the US is called MANCAN and features packaging remarkably similar to beer and comes with the tag “It’s not for girls”.

Interestingly too, the Ys prefer wine packaged in a can over a bottle. Another study in the US by Wine Spectator magazine found that 21-39 year olds found that canned wine “generally had the highest overall perceptions of (wine) quality based on the packaging.”

Commenting on the canned wine phenomenon, the UK’s The Independent quoted wine Tony Milanowski, a lecturer on winemaking at Plumpton College, who said: “Millennials love flouting traditions and hunting for new trends, from pop-up restaurants to the latest technology. As producers eye the tastes of the next generation of drinkers, they know that eco-friendly kegs and refillable bottles are already more popular in London, as are non-traditional grape varieties.”