The winning entry for the competition among Australia’s creative brains to create a campaign for Australia’s only paediatric brain illness charity Brainwave has been launched on Adshel’s digital screens.

The competition was sponsored by Adshel and is featured at two locations around Sydney – Bondi Junction Bus Interchange and Town Hall Station. The new technology uses gamification to draw attention and drive engagement with today’s connected consumers.

Brainwave, celebrating its 20th anniversary in 2014, offers practical and emotional support to children with neurological conditions and their families, supplying mobility equipment, providing funds for rehabilitation and ongoing therapies as well as bringing families together for some fun at a range of free events across the year. 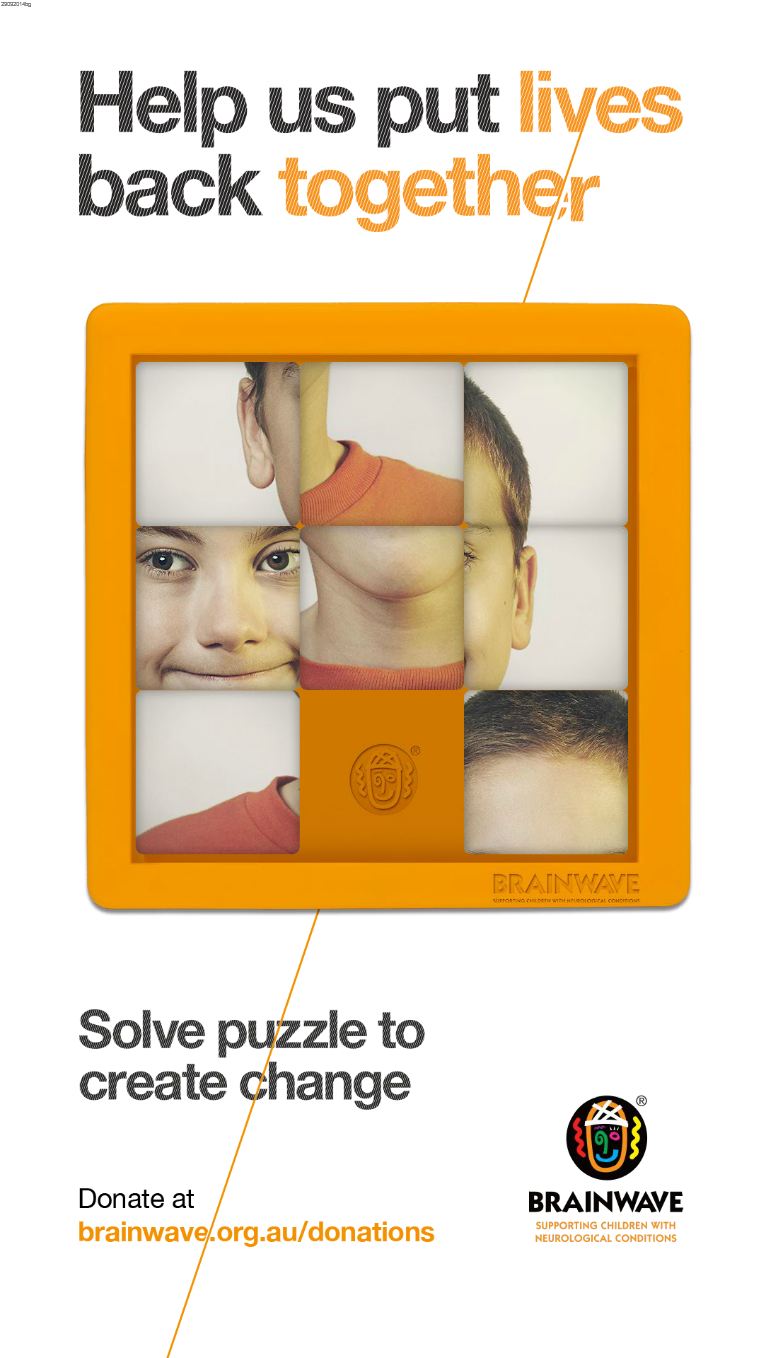 Working side by side with both Westmead Children’s Hospital and the Sydney Children’s Hospital, Brainwave has long supported families in New South Wales whose their lives have been turned upside down following the diagnosis of neurological illness in their precious child. The high profile nature of this campaign provides some much needed promotion for its vital support work.

Nick Blair and Adam Harriden from Traffik in Sydney won a trip to New York for their winning approach that features images of some of the children Brainwave supports along with the headline: Help us put lives back together. With a clever ‘jigsaw’ interactive concept, the design perfectly displays what Brainwave does for children whilst taking advantage of the latest digital technology Adshel offers.

Brainwave’s awareness building campaign is one of the very first to be deployed on multiple interactive screens as part of Adshel’s scalable digital network. Touch sensitive, the 70” high definition LCD screens provide the opportunity for consumers to interact with the screen, thereby creating campaign resonance, brand advocacy and recognition. The schedule kicked off on Monday 27 October and follows an extensive bus shelter campaign, also sponsored by Adshel, which appeared at locations around Melbourne and Sydney in August.

Brainwave’s Chairman, David Blackley, said, “As an ex-creative director myself, I understand the power of the advertising message. Coupled with the newest digital screen technology, we’re sure the Brainwave message will be well received by the thousands of people who will pass these locations every day. We are sincerely grateful to Adshel for their generosity; the opportunity to promote our message in such a high profile way is priceless to a grassroots charity like ours.”

Adshel’s director of marketing, Nicole McInnes, added, “Adshel is proud to support Brainwave in their crucial and inspirational work. An interactive digital campaign offers the ideal gateway to form a lasting connection between the charity and Sydney’s commuters. We’re delighted Brainwave is amongst the first organisations to benefit from our interactive capability and we look forward to the campaign driving awareness for their incredibly worthy cause.”

The Brainwave campaign will be featured on the interactive screens at Bondi Junction Bus Interchange and Town Hall Station and will be active for a week from Monday 27 October.

To learn more about Brainwave or to make a donation go to www.brainwave.org.au.