Our English cousins go to the polls in the next 24 hours to decide if the UK will remain in or out of the EU.

And one of the hottest issues from both the “remain” and the “leave” campaigns centres on immigration into the country, be it around the numbers, the origins and the cost.

However, one humble Englishman was so tired of the debate he took out and paid for his own full-page ad in The Metro in support of immigration. 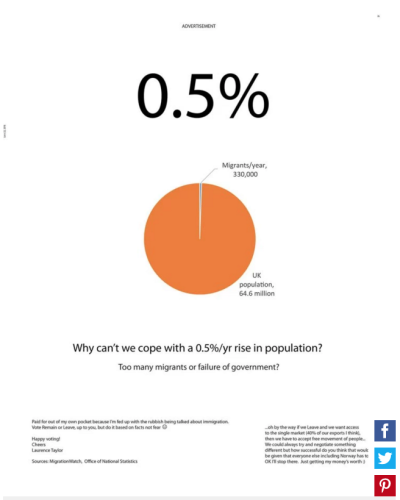 Laurence Taylor devised the ad and claims it was based on data from organisation MigrationWatch and the Office for National Statistics to highlight how few migrants actually came into the UK.

The copywriting says: “Why can’t we cope with a 0.5%/yr rise in population? Too many migrants or failure of government?”

It then poses “Vote Remain or Leave, up to you, but do it based on facts not fear.”

Taylor was interviewed for the paper about his reasonings behind the self-funded campaign and stressed he didn’t want his photo included because he’s “spent [his] life not wanting to be famous”.

“Suddenly it doesn’t seem so much of an issue. So why all the panic?” Taylor said.