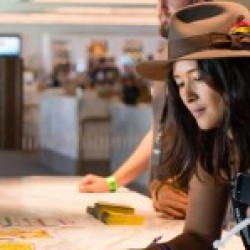 
BONDS are giving Australian men’s underwear an overhaul and drawing much needed attention to the hardships that all men’s ‘boys’ have to endure on a daily basis.

Bringing back ‘The Boys’, a pair of talking testicles in a new online and TVC campaign, they take a look inside the humorous world of men’s underwear.

This next wave of PG-classified content shows ‘The Boys’ get blasted with talcum powder, having a shave and going for a cycle.

Emily Small, head of marketing at BONDS said, “The campaign takes a light hearted, view of what really might go on inside Men’s underpants, it is a reminder to make sure your boys are always comfy.”

Results from Nature Research and Roy Morgan surmises that Australian men’s purchases of new underwear are far and few between, meaning that there are way more worn out and holey undies out there. An intervention is necessary!

Rich Williams, creative director at Clemenger BBDO Melbourne said, “We’ve put a great deal of faith in a pair of talking testicles to remind Australian men to look after their “boys”.

Acknowledging that men and their ‘boys’ need a break, BONDS are partnering with Uber to treat fans to a very comfy ride! Bonds will be offering $50 off rides to State of Origin Game 1 match on Wednesday 1st June at Sydney’s ANZ Stadium. Fans and customers can jump on the Uber app from 6.30-7.30pm ahead of the game, and a unique code will be set up that can be plugged into the app.

Launching this Sunday 10 April, the new campaign features a series of content, which will be released in TV and online over the next few weeks. The Boys’ campaign will also be seen across outdoor and POS.