While some have championed the Liberal government’s $83.7 million tax cut to the Australian Broadcasting Corporation (ABC) in the 2018 Budget, the people of Australia are not as supportive.

The cuts, which were announced as part of the budget last week and will be fleshed out through an “indexing freeze” to the ABC, and have already garnered national attention from senators and the media.

Now, The Australia Institute has given everyday Australians a voice to share their opinion of the cuts.

The poll, called ‘Hands off our ABC’, found 70 per cent of people wanted a strong ABC and 60 per cent agreed the ABC needed a “boost to long-term funding”.

Responding to the question, “The ABC and SBS should get less funding and provide fewer online and streaming services, so that they don’t undermine commercial media,” 58 per cent of participants disagreed. 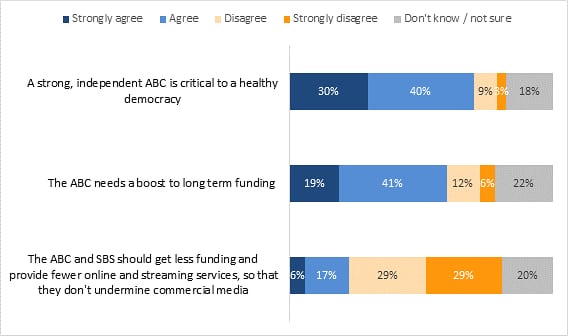 Speaking on the results, Australia Institute deputy director Ebony Bennett said, “With stronger-than-expected revenue, the government should be investing in a boost to the long-term funding of the ABC, a move that would be supported by a majority of voters.”

“Seven in 10 Australians think a strong, independent ABC is critical to a healthy democracy.”

“Cutting funding to the ABC is the opposite of what we should be doing in an age of ‘fake news’ and when the business model for journalism has been seriously disrupted.”

The ABC has found itself in a world of strife since the Budget cuts were announced.

ABC MD Michelle Guthrie vowed she would fight the cuts.

Guthrie told ABC staff the broadcaster’s execs would “oppose the decision and seek every opportunity to reverse the cuts in the coming months before they take effect”.

Adding, “Let me be frank with you: I am very disappointed and concerned that after the measures we have introduced in recent years to deliver better and more efficient services, the government has now seen fit to deliver what amounts to a further substantial budget cut.”

“This decision will make it very difficult for the ABC to meet its charter requirements and audience expectations.”

The Media, Entertainment & Arts Alliance (MEAA) has also made a statement on the cuts, labelling them “dangerous and irresponsible”.