Call it the MasterChef effect, but a new study into the eating habits of Australians show we’re eating out more (cafés, in particular), drinking less and we’ve given up worrying about our cholesterol.

The study by Roy Morgan Research compared Australians eating habits to a decade ago. It’s no surprise, the café is king, but we’re far more likely to go to the pub for a meal than a drinking session and far less likely to get a pizza home delivered.

Low-fat diets are falling out of favour, fewer people are preoccupied with their cholesterol levels, and more of us are opting to buy the same food week in, week out.

Whereas the proportion of Aussies going to the pub solely for a drink has dropped from 27.2 per cent to 23.2 per cent, heading there for a meal is another matter. In any given three-month period during 2016, nearly 45 per cent of us ate at the pub at least once (up from 38.8 per cent), which means that it is now more popular than ordering a home-delivered pizza (which plummeted from 43.9 per cent to 31.9 per cent). 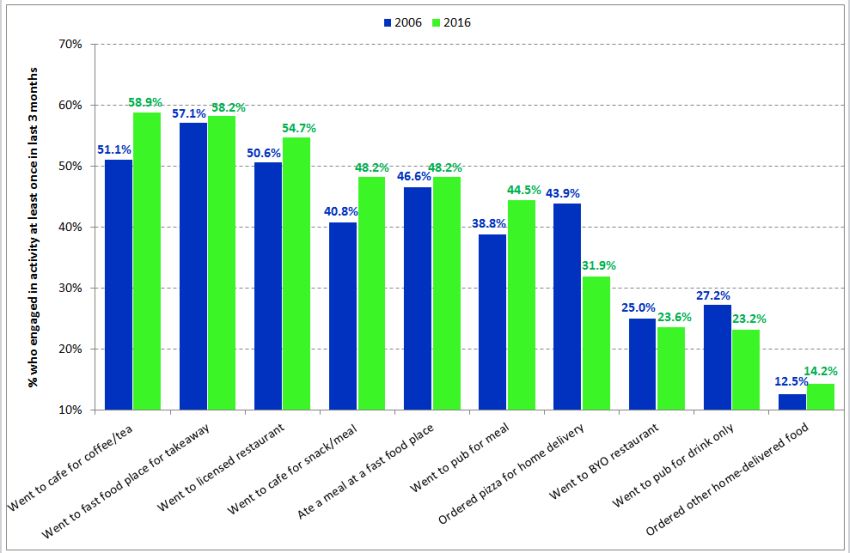 Though fewer Aussies are going to BYO restaurants (23.6p per cent) than they were in 2006 (25. per cent), dining at licensed restaurants has become considerably more popular (54.7 per cent, up from 50.6 per cent). Incidentally, the proportion of us who agree that ‘’If I could afford to eat out every night I would’ has crept up from 19.9 per cent to 23.1 per cent over the last decade. 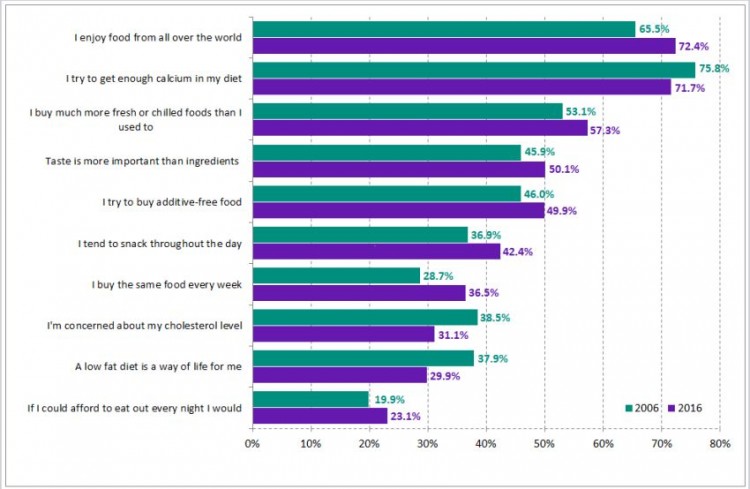 But a growing desire for the financial freedom to eat out every night is just one attitudinal shift related to food and/or diet that has occurred over the last decade. Almost three quarters of the population (72.4 per cent) now say they enjoy food from all over the world (up from 65.5 per cent in 2006), while 57.3 per cent report buying much more fresh or chilled foods than they used to (up from 53.1 per cent).

Food without additives in it has become increasingly popular (last year, 49.9 per cent of Aussies made an effort to buy it, compared with 46. per cent in 2006); as has buying the same food each week (36.5 per cent, up from 28.7 per cent). A preference for taste over ingredients, and a tendency to snack throughout the day, are also among the last decade’s key food-related trends.