Adblockers have been much in the news lately, especially as the last few years has seen downloads growing along an almost vertical trendline. But it may not be just advertising and cookie crushing that is motivating consumers.

As the chart below from business intelligence site Statista demonstrates (using data collected by the New York Times), so addicted have many publishers become to advertising that the inventory bloat is seriously compromising consumer data packages.

According to Statista.”For the readers however, online ads are mostly annoying: not only do they distract the attention away from the actual editorial content, but, as it turns out, they also take a heavy toll on mobile readers’ data consumption. According to an analysis conducted by The New York Times, in many cases online ads and scripts account for more than half of the data that is used to load mobile news websites.” 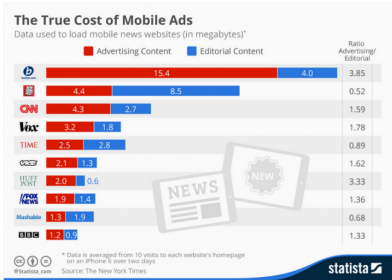 The worst example identified in the report is boston.com, which says Statista almost four times as large as the data to deliver advertising as it does to load the site’s editorial content.

Whole Boston.com is an extreme example it is hardly alone. The click shoring The Huffington Post is almost as bad, while the advertising on CNN for instance chews up one and a half times as much data as the stories that draw its readers.

Statista notes: “Meanwhile publishers and creators of mobile ads, who were recently alarmed by Apple’s decision to allow ad-blocking software on its mobile devices, should focus on increasing the performance of advertising content and thus improving the overall user experience.”