Advertise with us
Posted 7 November, 2017


Schools around Australia are being urged to switch to Fairtrade cotton uniforms, as part of a new campaign aimed at ensuring kids around the world get the opportunities they deserve.

Developed by Y&R Melbourne, ‘The Cleanest Uniform in Australia’ campaign has been launched by Fairtrade Australia this week, and will see uniforms sent directly to school principals and P&C members across the country, asking them to stop and consider the impact of the school uniforms they buy.

The campaign is supported by social and digital activations. 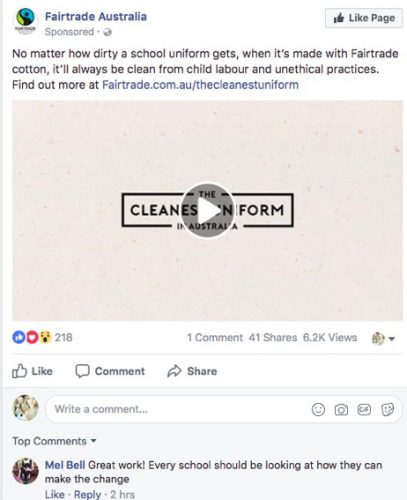 The uniforms are made with Fairtrade certified cotton, which means no matter how dirty they get, they will always be clean from child labour and unethical practices.

Molly Harriss Olson, CEO of Fairtrade Australia & New Zealand, said: “The campaign is designed to highlight the choice that schools, parents and students have regarding uniforms.

“By simply switching to a uniform made with Fairtrade cotton, they can make a positive impact on the lives of children around the world.”

Brad Smith, group account director at Y&R Melbourne, said: “Many schools aren’t aware that the uniforms currently worn by their students can mean children in the countries where the cotton is produced can’t go to school at all.

“Now, schools around the country can switch to ‘The Cleanest Uniform in Australia’ to ensure kids around the world get the opportunity they deserve.

“Half of Australians aren’t aware of the Fairtrade Mark, and yet, the majority of us are influenced by the important work they do – preventing child labour, paying a fair price and ensuring sustainable farming practices.

“Highlighting the positive impact of Fairtrade via school uniforms is a powerful way to connect with Australians.”