During a Vivid Ideas event, Yahoo7’s director of product and audience, Caroline Casey presented the latest research on mobile trends and consumer insights. The key findings are: the only way to distract mobile users is through the power of Beyoncé and Kim Kardashian emojis are the future of personalisation.

“Flurry is informing all of those developers about what’s happening in the app, audience behaviours, how to reach a new audience,” Casey said during her presentation. “Mobile is one of the most personal advertising mediums. But one of the challenges is how do you get people’s attention once they’re engaged in mobile? What does it actually take to distract a mobile user from what they’re doing in their phone?”

Flurry data focused on the Super Bowl and the answer is Beyoncé! “The only thing that distracted the audiences during the Super Bowl was Beyoncé. No doubt everyone has got their eye on the TV and they’re watching the game, but they’re looking at additional things on their mobile- stats, apps, talking to their friends on social. But once the Half Time show started, phones go down because Beyoncé is on the screen and there’s lots of excitement.” 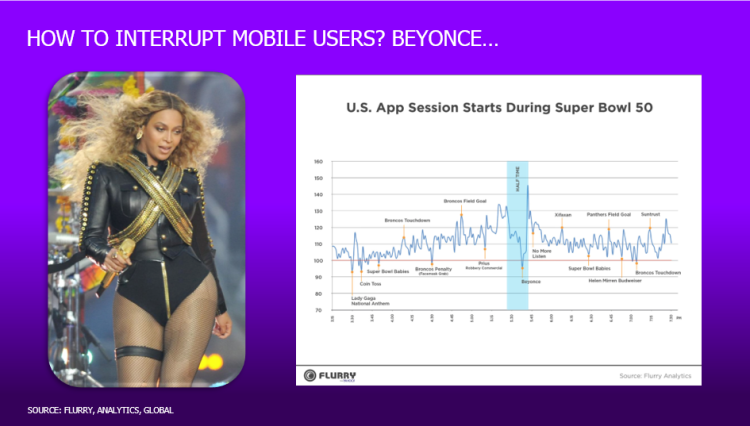 Mobile marketers need to get Beyoncé on board because she is the only thing powerful enough to distract people from their mobile obsession.

Casey continued to outline how personalisation of apps and the mobile experience has skyrocketed last year. “In 2015, Aussies made their mobiles much more personal- personalisation apps grew 289 per cent like emoticons, personalised keyboards, lock screens. Unsurprisingly Kim Kardashian’s Kimojis launched number one in the App store on the day of its release.

“This is a great example of a brand, Kim Kardashian, getting really close to her audience in the mobile experience and using it in a unique way. Kim’s fans are able to have her in their pocket, when they want express themselves they’re using her image.”

Casey is also one of the amazing 40 women who feature in B&T’s Women In Media magazine- click here to find out more.

“It’s really interesting to me how ‘hot’ personalisation is right now. Ten years ago, back in the Myspace days, people would personalise their Myspace like their bedroom. It’s really come full circle, people really want personalisation in their small screens because it’s with them all the time,” Casey told B&T afterwards.

“For example: when people go to the Yahoo homepage, all of that content is served up to the person- not because of who they are, but how they behave. It’s not demographic data because demographic data is assuming because you have a female in mid-40s they will be interested in certain things. But it’s not true. We look at behaviour, because that’s what you do.”