For those sick and tired of being bombarded by news about the US election, tomorrow is the day it all comes to a head and the American public will finally turn out to vote.

Last month, B&T heard from TubeMogul’s senior vice president of global agency sales, Mark Rotblat, in San Francisco on what trends the company had seen in political advertising. TubeMogul’s first revenue stream was as a content analytics business tracking and analysing online video, and they were the first to track views on YouTube videos on Democrat and Republican candidates.

Political advertising in the US changed fundamentally in 2002 when a landmark supreme court case prohibited the government from restricting independent political expenditures. This opened the floodgates for an era of unlimited spending.

Since 2002, estimated political advertising revenues have grown exponentially, with a report from Borrell and Associates earlier this year predicting that total political spend in 2016 would be over $10 billion, an increase of $2.5 billion in the last two years. 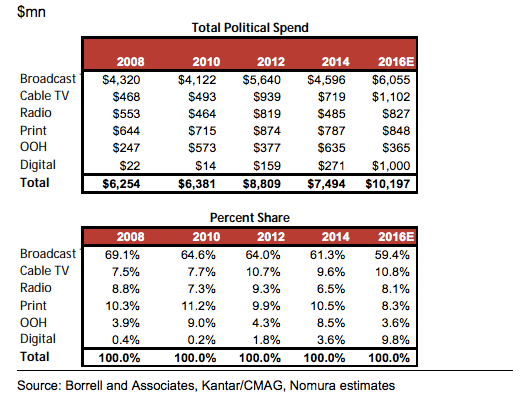 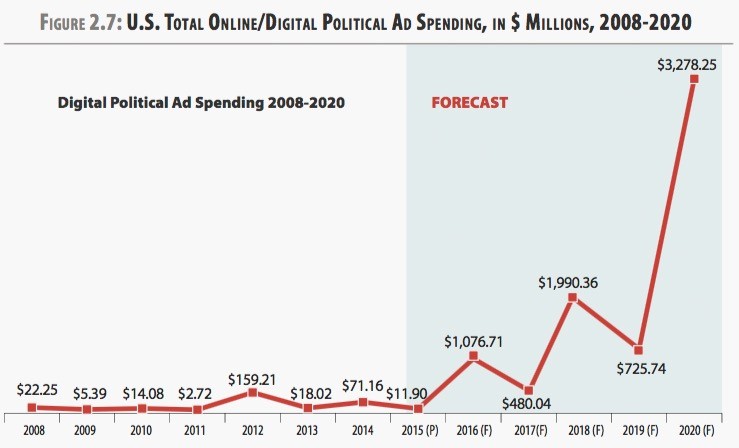 Based on the increases in political advertising spend, you would expect the election ad spend this year to be off the charts. In reality, ad spend is down on expectations, and the reason for that is inextricably linked to one man… Donald Trump.

TubeMogul’s Rotblat runs us through some of the reasons why ad spend is down.

Firstly, as of March this year, Trump had already garnered $2 billion in free media. 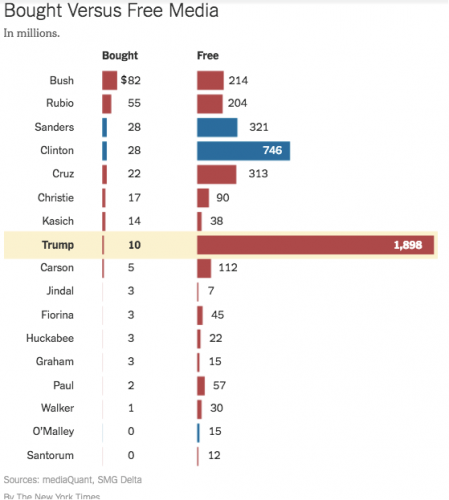 Trump has consistently generated news by conducting interviews and press conferences as much as possible. He is also very active on Twitter. Following the principle that no PR is bad PR, Trump’s approach is so starkly different to any other candidate that is always working on spin control and measured responses.

He isn’t afraid to counter-punch any negative press he receives, which only serves to generate more discussion in the media. He’s also not afraid to say the opposite of what he said previously, again generating more media.

This free media has led to massive increases in TV news ratings, with every news station shattering prior records. Although this is good for revenue in principle, ad spend for the presidential race is down 60 per cent.

If Trump is getting free media coverage, why would he spend money on advertising? Instead, he’s preferred to use Twitter, where he has control over the message.

Political advertising is a competitive game and part of this is locking up inventory so that competitors can’t buy it. Normally, the inventory is bought early in the year, but because of the uncertainty with Trump and the amount of media he has received for free, the inventory hasn’t been locked up in advance. Hillary hasn’t had to allocate as much money to TV because Trump is not spending much in TV.

Secondly, the Koch brothers who had allocated $900 million in ad spend to the Republicans backed out when Trump was elected the Republican candidate, reducing their spend to around $200 million.

The other question is: will this translate internationally? Will we see more candidates like Trump in other countries, including Australia? And will the future campaigns be conducted on Twitter rather than the traditional media channels?