In another example of the power of social media, Telstra has had its hand forced by the pressure brought to bear by fans of the Splendour in the Grass music festival who vented their spleens when it was revealed that there would be no Telstra coverage of the event.

Splendour organisers, Village Sounds, walked away from the negotiating table with Telstra over the cost of supplying a 4G tower for the event. Village Sounds then took to social media to let the fans know via its Facebook page that those people coming to brave the crowds, mud, shit, soul-destroying queues for booze, freezing cold and dodgy camping spots would be doing so without the small comfort of adequate Telstra coverage.

In an online statement made on 30 June 2014, Splendour said each mobile phone company traditionally provides a Cell on Wheels tower (COW) to expand network coverage.

“This year Telstra will not have any COWs on site at Splendour and this will have a major impact on their network coverage at the show.

“We have been in discussions with Telstra since Sept 2013 and early on they committed to providing free COWs as they did for Splendour’s 2013 event. Only last month Telstra withdrew this commitment and provided us with a prohibitive quote to supply these COWs.

“While we are committed to providing you with the best Splendour experience possible, we are not in a position to pay many hundreds of thousands of dollars for a service that actually generates revenue for Telstra,” the statement continued

The last count on the post when B&T checked was 542 comments with many people saying they would ditch their Telstra service in favour of Optus or Vodafone. Posts included customers sharing their interactions with Telstra’s own social channels asking about coverage at the event, which sold out in a matter of hours. 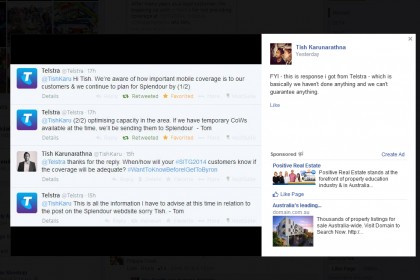 From the Splendour Facebook page a change.org petition was born and Telstra clearly had a social media backlash on its hands.

However Australia’s biggest telco, which has invested heavily in its social presence in recent years, quickly swung into action and made the following announcement:

As indicated we’re aware of how important mobile coverage is to our customers and we would do everything we can to ensure our customers attending the Splendour in the Grass event have the best experience. We have reviewed the availability of some of our temporary CoWs normally used for emergency responses, and will be able to provide two Satellite Cells on Wheels for the Splendour in the Grass event. This temporary infrastructure will provide 3G mobile coverage for Telstra customers attending the event – voice and data. However, these temporary facilities may not provide capacity to support the busiest periods during the festival, so we ask our customers to be patient during these times, wait a few minutes and try again. We’ll also continue to talk to the event organisers about a more suitable permanent solution for future years.

Steve Carey, general manager of media for Telstra, told B&T that the telco had been in negotiations with Village Sounds since March 2013 to create a permanent 4G mobile tower, “but at no stage did we say we would not supply the Sat CoWs as we have in previous years so we were a little bit surprised by Splendour’s announcement”.