Virtual reality is in the industry buzzword of the moment And in this opinion piece, MediaCom’s David Toussaint, recent 30 Under 30 winner) and relunctant tech-head, says, having recently strapped on a pair of VRs, it could possibly be the best thing ever!

I see a lot of posts about things like VR, and wearables and I actively avoid them. 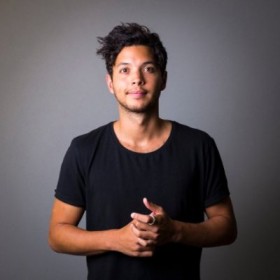 I could argue that I’m trying to be like an everyday Australian that doesn’t work in advertising wanting to remain ignorant about new tech in order to plan better by keeping it real, but that’s not true. I was just never that interested.

That is until last week when I tried it.

Now the reason I write this is because a lot of the time I avoid things written about game changing tech, and 10 things brands need to know about VR today because it’s not speaking my language, it’s for very keen people to put in trends decks and create some wonder, which is great. I have no beef with these people, these people are just not me.

So I write this for people like me that get by with tech but like to keep it top line. The people that haven’t updated the system on their iPhone for a while. The people whose eyes glaze over slightly when someone says programmatic and get very interested in the birds flying past the window outside. The people that think “what a life they must have?” and then quickly nod at whatever was just said.

So here it is, this is what is brilliant about VR, keeping it really basic.

Last week during ComX (an event created by MediaCom that ran simultaneously with TedX featuring talks and technology aimed at encouraging disruption & innovation), partner News Limited organized an HTC Vive. Brought in some HTC Vive? I don’t even know how to say it. There was HTC Vive there, it was in the building. Whatever you know what I mean.

And I was really sceptical. I wasn’t that fussed about it where others were. Like my dad Mario who kept his Nokia 3210 for years when the iPhone came out I just didn’t care. I didn’t need it. The world was perfectly fine the way it was.

And here’s the thing. It was fantastic. There was a grid in there, like the Simpsons episode where Homer goes 3D and I was inside the grid, and I could see the control in my hands and could look around. And I said “holy shit, this is cool!” And the guy running it laughed and said that this was only the loading menu and he was having some problems getting the level ready.

But for me I was already excited enough. And that’s what I want to reflect on here. There are probably a lot of people out there like me, that aren’t that techy, that live fairly normal lives and aren’t that whatever per cent of trend setter who need to be involved first with the best of the best. The people that would be pretty happy with just a little bit of fun in their day to create a positive experience. The people that would probably be happy with a branded loading screen because they were trying VR for the first time.

It sort of looked like Abed’s virtual world in world’s best show Community.

Anyway. Then the game loaded and I’ll touch on that briefly. Basically I spent five minutes defending a wall of a castle from little men with swords trying to take the gate. I’d load up a bow and arrow and fire it at the little sods and when too many of them got to the gate I’d fire at the roof and send burning oil on them. There were barrels that would explode as I did my duty for whatever kingdom or house I was defending. I was Legolas, I was Robin Hood, I was me at 10 years old at club med shooting bullseyes on a family holiday, I was in a different world. And I thought, wow. I want some of my friends to come with me into this world. We could defend the gate together. What if we spent our weekends defending the gate together? What a life!!

Anyway, I had a bloody good time. And it was simple, and the graphics were pretty basic like a Wii (probably on purpose not throwing shade at whatever game I was playing) and I walked away feeling really happy and a little bit dizzy.

So my view on this now has completely changed, and I had a really basic experience and that’s the thing. I just needed to get with the times. Like my dad Mario who now has an iPhone, two iPads and an iMac, I think I’m ready to embrace it.

Because most of the population are probably more like me, and less like you tech gurus talking about it now. Who might jump on this and start a comment war. But watch out guys, I’m pretty good with a bow and arrow now.