Advertise with us
Posted 7 September, 2017


McCain Foods is taking its new Rustica pizza to the streets across Melbourne and Sydney to demonstrate that frozen pizza can taste as good as woodfired pizza.

It called upon shopper engagement specialist, Extravert, to help and they sourced a 1962 Chevy Truck from the US that has been converted into a rustic pizza kitchen to bake the three types of sourdough crust pizzas. 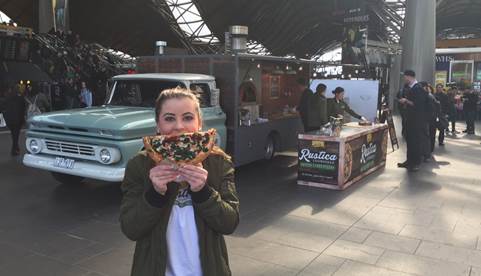 Extravert’s Daniel Cormack said the investment in live engagement and sampling will reach thousands of people and is a beneficial investment.

“Sampling and experiential campaigns are not used to replace traditional advertising but in conjunction with them to reinforce the brand and product. They bring brands to life with colour, emotion and engagement and in the case of McCain, the distinctive pizza aroma!”

“We have only completed a few locations and already we know that our brief – to demonstrate that finally, there’s now a quality woodfired pizza in the freezer – has been achieved. The public’s response has been fantastic,” Cormack added.

“Many consumers don’t believe that a frozen pizza could taste as good as Rustica, hence our reason for investing in the pizza truck. By getting consumers to try it, they taste that Rustica pizza can deliver a top quality pizza in the comfort of their own home.”