The Simpson’s family was right, “you don’t win friends with salad”. A disgruntled Woolies’ customer has posted a video of a huge huntsman spider she found in the Italian style salad mix. Also Woolworths and Coles pre-packaged salads have been recalled due to Salmonella outbreak.

In the post, Zoe Perry said: “Hi Woolworths, Shopping as per usual for Italian Style Salad Mix….get it home….Mum goes to open the packet and we are greeted by….Is this what’s actually behind the “salmonella” callbacks? Kind Regards, An arachnophobic family” 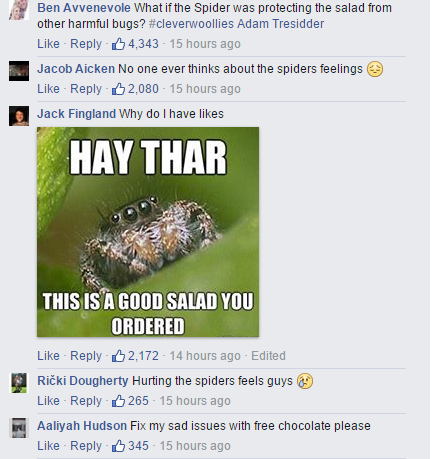 Spider-gate follows Woolworths and Coles recalling prepackaged salads after they were linked to a spate of salmonella cases in Victoria. So far 54 people have been diagnosed with a rare strain of bacteria and two were hospitalised after eating leafy greens linked to Tripod Farmers, based in Bacchus Marsh, west of Melbourne.

The outbreak is believed to be linked to a fertiliser sourced from chickens and used to grow the lettuce.