The unanimous ‘yes’ vote in Ireland to legalise same-sex marriage was a massive win for the country, with the home of whiskey and leprechauns already advertising itself as a gay wedding destination.

Per Pink News over in the UK, Ireland’s tourist board has already created an ad, even though the law won’t come into effect for several months.

While the move is a huge shift globally for making same-sex marriages legal, one couple who weren’t a winner in the campaign were the couple and their toddler who were used in the ‘NO’ campaign ad. 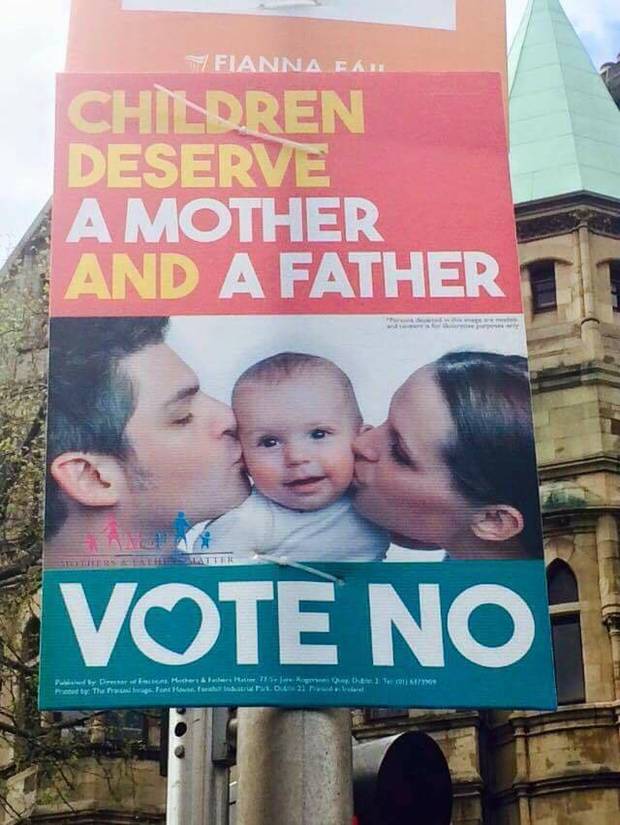 Image via The Telegraph in Belfast.

Stock photos are widely used for campaigns, articles (we use stock photos regularly) and numerous other areas, however one family who posed for stock photos found their image picked up by gay-marriage opposition, Mothers and Fathers Matter – a stance the family said they did not agree with.

B&T has contacted Mothers and Fathers Matter for comment, but has yet to hear back at the time of publishing.

The family in the poster asked Amnesty International to release a statement on their behalf to correct their position on marriage equality.

The statement outlines the couple’s background of the photo, explaining how the family has posed for a photographer friend.

“No money was exchanged – we got nice photos for free, they got nice images for their portfolio,” the statement from the couple reads. “As part of this agreement, we agreed to let them upload them to a stock photo album. We knew that these were available for purchase and we gave permission. Perhaps, naïvely, we imagined that on the off chance that any was ever selected, it might be for a small magazine or website.

“We were surprised and upset to see that the photo was being used as part of a campaign with which we do not agree. We completely support same-sex marriage, and we believe that same-sex couples’ should of course be able to adopt, as we believe that they are equally able to provide children with much-needed love and care. To suggest otherwise is offensive to us, and to many others.”

According to the BBC the couple, who wish to remain anonymous, have recognised the image hasn’t been stolen from them, and as they gave their permission for the friend to upload to the stock image website they can’t do anything.

“The chances of having your photo selected out of all the hundreds of thousands available are pretty slim,” the father in the poster told the BBC.

“The photo was not stolen from us… we have no claim over (or rights to) the picture, and we do not claim otherwise,” he added.