B&T’s editor in chief, David Hovenden, is reporting live from the coalface that is Cannes 2015. When not being refused entry to VIP events he’s casting a keen eye over this year’s winners and losers. Here’s his synopsis thus far…

M&C Saatchi Sydney has chalked up its third gold of the Cannes Lions all thanks to the Clever Buoy campaign it developed on behalf of Optus, with the agency overnight being awarded a Gold Lion in the Cyber Awards category to go along with its Gold Lions for PR and Mobile. 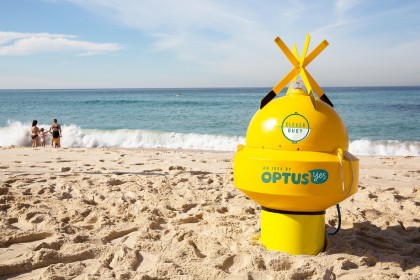 In total the campaign has so far won three Gold Lions and two Silver Lions for the shark-sensing device, picking up its second silver in the Cyber category as well.

M&C Saatchi also had a hand in another Bronze Lion, although the bulk of the work, again done for Optus, was carried out by video content agency Emotive, part of the APN News and Media group.

The campaign ‘Let’s Make An Anti-Ad With Ricky Gervais’, marks a very positive start to Emotive’s life, which only opened its doors earlier this year in sleepy beachside hamlet Clovelly in Sydney.

The Grand Prix in Cyber was taken out by Droga5 New York for its work for Under Armour ‘Gisele Bundchen – I will what I want’.

There were Lions aplenty handed out to Aussies in the radio category with BMF making a welcome return to the winners circle gathering four Bronze Lions all for the different Sportsbet spots it produced.

GPY&R Melbourne was the most honoured Aussie in the radio category, however, for its work honouring our Gallipoli heros in its touching Letters from Gallipoli campaign earning the agency no less than six Silver Lions for its work on behalf of Legacy.