A new app from global publication The Economist, The Economist Espresso, aims to help people start the day feeling smarter by delivering a quick shot of news and information.

The insight and opinion publication is launching an app which offers a five minute morning wrap up.

According to its editor-in-chief, John Mickelthwait, the app’s point of difference is that is provides a news update that is “finishable”.

He said: “We’re only going to take five minutes of your time. We will fill you up with ideas so you can go off and start your morning. That is quite similar to the weekly edition, which, although it’s quite long, is still finishable.”

When a reader has swiped through all the articles on the app, it tells them ‘that’s it’.

Mickelthwait said: “It’s giving you permission to go off and do other things having hopefully made you feel smarter.”

The initiative behind the launch was a mixture between new technology and old Economist ideas.

“The aim is to get the same kind of feel you do from reading The Economist,” said Mickelthwait. “We looked quite carefully at what our readers were doing because our readers are increasingly using digital, particularly smartphones, and we began to see this opportunity to reach them.”

The app has three sections, ‘Today’s Agenda’, ‘The World in Brief’ and ‘Market and Currencies’. The Agenda section includes five ideas each day for readers to wrap their heads around. 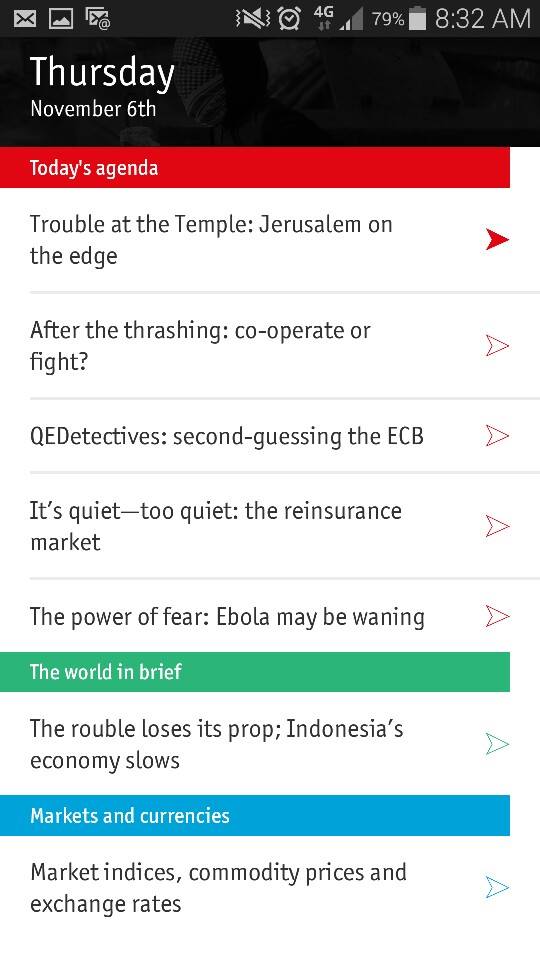 “There are five longer segments, still less than 150 words at the beginning that are meant to say ‘this is what’s going to happen today’,” he explained. “Now you know this, here’s an opinionated take on it and you’ll feel smarter as a result.”

“One is sponsorship,” said Mickelthwait. “Every day it says ‘this edition of Espresso is brought to you by’.”

However Mickelthwait was quick to add that sponsored editions will highlight the content was in no way influenced by a paying advertiser.

Mickelthwait added: “There’s also an advertising slot or two in there as well.”

In addition to this, subscriptions will also be paid. “We’ve always focused on a business model which relies on bringing good content that people are prepared to pay for,” said Mickelthwait. The cost to readers is $3.99 a month.

To spread the word about the app, Mickelthwait’s team is looking to owned, earned and paid media.

“We’re relying quite heavily on word of mouth. We’ll put it in this week’s Economist. There’ll be a digital campaign as well and there are one or two specific ads about it. In general, there’s a fairly wide selection of people who we think will at least try it.

“In the launch period, the hope is to get between half a million to a million downloads.

“We hope it adds greater value to existing subscribers, but also it will bring in lots of people who are either potential subscribes or just want to subscribe for this. I’ve learnt to be modest about predictions about who will get what.”