To tweet or not to tweet- that is the question brands are pondering today after the announcement that music legend Prince has died at the age of 57. Prince was found unresponsive in his home in suburban Minneapolis, Minnesota. The cause of death is not yet known.

Early this year, brands followed a similar product-placement condolences when David Bowie passed away at the age of 69. So far, two brands have deleted tweets about Prince after backlash from Twitter fans: 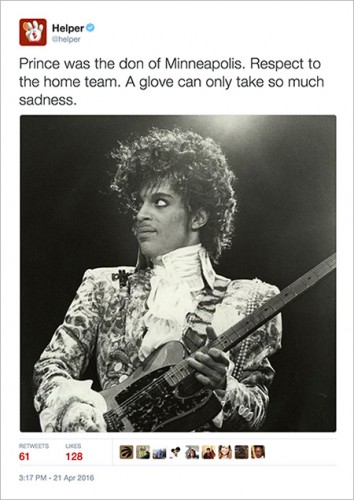 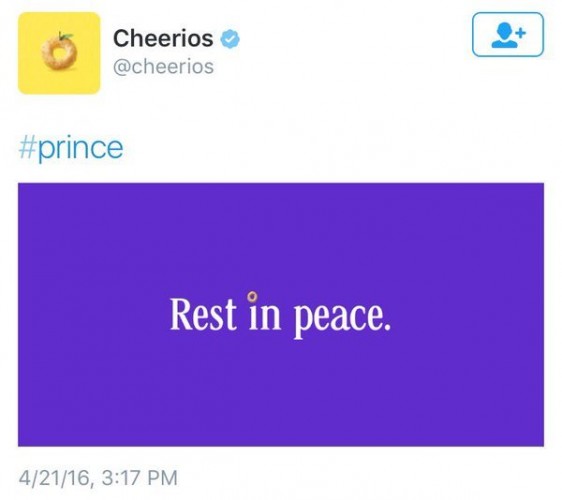 The company behind Cheerios, General Mills, told website Consumerist: “As a Minnesota brand, Cheerios wanted to acknowledge the loss of a musical legend in our hometown. But we quickly decided that we didn’t want the tweet to be misinterpreted, and removed it out of respect for Prince and those mourning.”

Check out some of the brands tweeting about Prince’s passing, including a tweet from Getty Images which included a purchase link to a Getty image of Prince:

We are saddened today at the news of Prince’s passing. His music meant so much to so many. pic.twitter.com/qMpnSO5zIq

A purple nebula, in honor of Prince, who passed away today. https://t.co/7buFWWExMw pic.twitter.com/ONQDwSQwVa

People on Twitter have not taken kindly to brands jumping on the bandwagon:

@MakersMark Prince took a strong stance against alcohol.
He would hate this.

Prince was a true original and a Minnesota icon. We will miss him dearly.

@MakersMark Inserting yourself into this conversation just to promote your brand is despicable. https://t.co/eb7xLmyrdk @michaeljhudson