The statement, which sought to “update you on the changes we’re making to better protect your Facebook information”, addressed the extra 37 million Facebook users impacted by the data breach nearing the end of the article.

The blogpost says, “In total, we believe the Facebook information of up to 87 million people — mostly in the US — may have been improperly shared with Cambridge Analytica”, and admittance which is accompanied by the following graph. 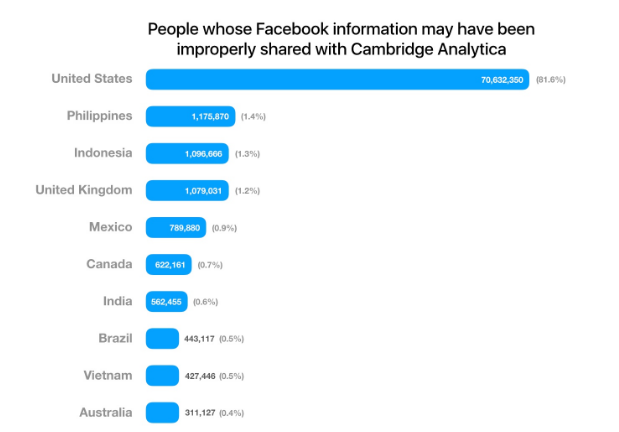 Surprisingly, the Philippines was the second worst impacted country behind the US, with a whopping 1.1 million Facebook users affected.

Australia made up 0.4 per cent of the total number, with more than 300,000 accounts “improperly shared” with Cambridge Analytica.

The numbers indicate a total of more than 87 million accounts were shared, a big difference from the original number of 50 million.

In the blogpost, Schroepfer also detailed the measures being taken by Facebook to secure users’ data.

The steps include disabling the ability to search for a user by their mobile number, denying Facebook access to content within messages and calls on the platform, allowing users to see what apps Facebook is sharing their information with, as well as a series of other changes.

The last change mentioned was directly inspired by the Cambridge data breach, according to the social media platform.

Using this “improperly shared” data from Facebook, Cambridge Analytica was able to gather information which enabled both UK’s Brexit vote out of the EU, as well as Trump’s presidential campaign and eventual win.

According to media outlets, a conference call was set up involving Facebook founder Mark Zuckerberg after the revised numbers were released.

During the call, Zuckerberg took responsibility for the breach and dismissed rumours he would be stepping down.

Zuckerberg acknowledged Facebook “didn’t take a broad enough view on what our responsibility was and that was a huge mistake. That was my mistake.”

When questioned whether his role was in jeopardy, Zuckerberg said, “Not that I know of!”

A week ago, Zuckerberg broke his silence on the breach in a statement, five days after the initial scandal broke.

“We have a responsibility to protect your data, and if we can’t then we don’t deserve to serve you,” the statement read.

“I’ve been working to understand exactly what happened and how to make sure this doesn’t happen again.