Seven West Media’s attempt to silence Amber Harrison following yesterday’s court injunction appears to have backfired as the former CEO’s mistress has again taken to Twitter to attack the network and its board.

Harrison’s Twitter page is awash with anti-Seven sentiment with particular venom reserved for Seven board member Jeff Kennett who, it would appear, Harrison believes has besmirched her to protect her former lover and boss, Tim Worner.

It has been reported in Fairfax Media this morning that Seven are seeking legal advice as to whether Harrison has broken the terms of the injunction. A Seven spokesperson told Fairfax the network was “appalled” by Harrison’s behaviour and its lawyers may proceed with contempt proceedings. 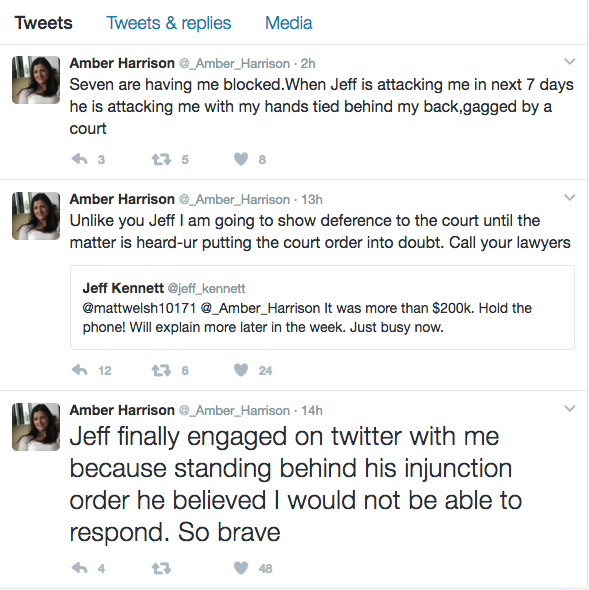 Harrison’s also changed her Twitter cover photo to this positive and provocative statement:

Yesterday, Seven got an interim injunction in the NSW Supreme Court to stop Harrison “releasing documents or information that is the property of the company, which she appears to have taken before she left her employment and which she has retained without authority and in breach of her employment obligations”.

The injunction was designed to stop Harrison leaking sensitive emails and documents from her time at Seven via social media that were designed to embarrass the Seven board ahead of tomorrow’s results announcement. It’s understood Worner will host the results tomorrow, the first time he has fronted media since news of the affair broke in mid-December. It could also be a tough time for the boss (and share price) if the results are short of spectacular.

One can only assume that Seven have its best legal team on this and it appears its goal is to continue to smear Harrison and drown her in legal expenses rather than cough-up the termination money she seeks (reported to be as high as $2 million).

The injunction hearing is set down in the NSW Supreme Court next Tuesday and Harrison is expected to fly up from her Melbourne home to attend.