Gideon Hornung, head of strategy on Telstra at OMD, writes about why more brands should get on the Snapchat bandwagon and why the platform is the future of consumer engagement.

Snapchat has come a long way since it launched in 2011. In five years it’s evolved from a teen sexting platform to a thriving social channel with 100 million+ users who watch 10 billion videos a day. More people are consuming video content on Snapchat than on Facebook, a platform with ten times the number of users.

With 45 per cent of Snapchat’s users under 24, Mark Zuckerberg tried unsuccessfully to buy it in 2013 for US$3 billion – today it is worth US$16 billion and has become a disruptive force on the social scene.

Its addictive playfulness comes from the array of customisation available for the ‘snaps’- from captions, to doodles, to the impressively effective augmented facial lenses that can turn you into a zombie, panda or cyclops- with options cycling through daily. The jewel in the Snapchat crown is that posts self-destruct after a certain timeframe set by the user- from 1 second to a maximum 24 hours.

This evolving communication style sacrifices precision for speed and replaces words with acronyms and emojis to create an authentic and highly conversational language online. We are seeing a change in behaviour from a curated public image, to an informal and casual private one.

These changes represent an exciting opportunity for brands that are brave enough to get on board and are willing to drop some of their formality and pretense and have a bit of fun. It’s an opportunity to move away from advertising and formal corporate communications and have more relaxed and authentic conversations with consumers.

Below are 5 reasons why I believe Snapchat is the platform to disrupt the way brands interact with people.

1. Snapchat gives brands a license to have some serious fun

Because of the ephemeral nature of Snapchat, users can send snaps without the fear of judgement and repercussions, (not to mention trolling comments) that come with the territory of public facing curated platforms like Instagram and Facebook.

This feature is precisely what makes Snapchat very attractive for advertisers, and encourages brands to be more informal and fun. If Ivanka Trump can post a ‘dog lens’ selfie getting ready for the Met Gala, and a premium brand like Audi can post unrelated cute animal memes during the Super Bowl, then any brand can do away with their prescribed brand personality and advertising guidelines and entertain their followers.

The end result is that by acting less like a traditional brand, advertisers create intimacy and trust between themselves and their users.

2015 was the year of live phone streaming, with the launch of Periscope and Meerkat, and the soft launch of the Facebook Live platform, which is now, well live. 2016 will take live streaming up another notch. Earlier this year over 20,000 viewers tuned in on Periscope to watch pedestrians attempting to cross over a large puddle in the north of England, known as #DrummondPuddleWatch.

This may have been a popular novelty, but typically the problem with live social streaming is that it isn’t particularly interesting. It’s chaotic, the quality of video shot on smart phones is frequently poor and there are lots of boring bits.

Imagine if it had been Hunter, the classic gumboot brand that had curated content around #DrummondPuddleWatch, posting just the killer highlights. It would have been on- brand and a good example of interesting user-generated content.

Snapchat has been curating live events, from sport through to fashion via their Live Stories section since 2014. This short, sharp format of only the best bits aggregated from users with overlays, comments and drawings brings a lot of colour and intimacy to the live format offering.

Snapchat recently partnered with NBC to bring users upcoming behind the scenes and on the ground coverage from the Olympics (the biggest live event in the world) – the perfect format to compliment long form TV broadcasting. Right now, if you want to get a flavour of the torch journey to Rio in a real and authentic way, Snapchat is the place to be.

The combination of mobile-only and highly cursory content makes Snapchat the platform best suited to capture unscripted and unplanned lo-fi ‘real moments’. The app doesn’t let users pre-record or edit content, which encourages greater spontaneity, and Snaps can’t be polished and saved for later as they are sent in real time.

If a post is only 10-seconds long and promptly disappears, brands can capture impulsive moments with less risk involved.

Taco Bell, who were one of the early adopters of Snapchat, saw its potential as a way to reach millennials, now the largest living generation in the US. Hiring in-house content creators who are of course, millennials, has enabled them to move away from perfectly curated content to fast and reactionary real content. You can’t be nimble or constantly authentic if you have designers and creative agencies labouring over every image. 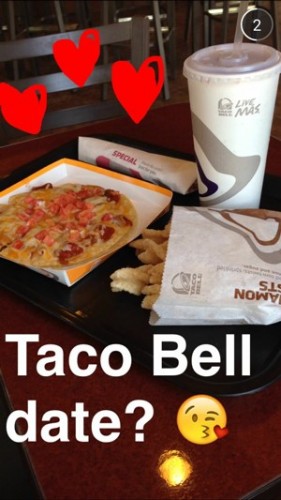 But it’s not just playful brands targeting millennials that are seeing the value in this approach. Cisco, a global leader in networking technology has launched a WeAreCisco account, with control relinquished to their employees across America-offering a view into their lives with the company, such as staff crawfish boils and office tours.

The account performs a dual function of demonstrating not only how well Cisco treats its employees, but how these employees are able to work remotely from their homes using Cisco technology. The lo-fi nature of the content means the company is able to offer an authentic behind the scenes of what life is like working for Cisco.

4. Brands can entertain, not just interrupt on Snapchat

It’s an uncomfortable reality that most of what brands and advertisers offer to consumers either interrupts them or is irrelevant. While still in its early days of advertising, the current Snapchat model enables brands to give consumers “toys” to play with and incorporate into their own snaps.

Snapchat currently offers users ‘lenses’ to augment their face with different features e.g. an interactive dog mask which responds to specific facial gestures. At present, there are 10 of these and they change daily. Brands have now also begun to offer their own product-specific versions. On the release of the new Disney film, The Jungle Book, Snapchat offered users a framed “Jungle Book” lens, which turned users’ faces into the snake, Kaa.

What makes these types of offers so powerful is that they provide consumers an entertaining way to interact with the brand, which they then want to share with their friends. This kind of endorsement is far more powerful than a one-way ad.

It’s still in its infancy and Snapchat’s offering will continue to evolve, but brands giving people something they genuinely want in exchange for their attention is the necessary future as it becomes easier for consumers to avoid advertising.

5. It has the capacity to be a really powerful retail channel

I believe Snapchat has the most potential as a retail tool. Using Snapchat’s sophisticated geo-targeting (previously only available in the USA), McDonald’s offered a ‘Lovin’ summer fun’ illustrated frame to users only available when they visited one of their 14,000 store locations.

Most major cities, landmarks or suburbs already have geo-filters, but this was the first time it was used by a brand to target their customers. It reportedly cost US$750,000 for one day.

In February this year, Snapchat extended geo-targeting to the UK and Canada (with Australia just launching) and reduced prices significantly making it more affordable. Brands submit artwork, store locations and the length of time required (from an hour for an event to all day) and the filter can be up and running in one day.

Additionally, the old fashioned coupon has been given a sexy millennial makeover with Snapchat. Oak Milk in Australia recently tested a 1 second coupon, which consumers had to screenshot and then redeem.

In the US, Handles, a frozen yoghurt chain, asked customers to snap a shot of themselves eating one of their yoghurts in exchange for a discount coupon, which would only be revealed after opening in-store. This was a simple and effective way to drive purchase frequency.

Snapchat offers a way for brands to connect with a younger audience and capture attention in a time where attention has never been more limited or precious. Its informal and temporary nature means brands can step outside of their usual advertising parameters and entertain their consumers, not just interrupt them with advertising. Snapchat also has the chance to be a useful tool for retailers by building anticipation for new products and offering social currency.

Despite all of this, Snapchat still has a major challenge to work through, particularly in the advertising reporting space, where brands expect access to detailed analytics and reporting of who is interacting with their advertising. This is a big hurdle Snapchat needs to overcome if it wants to play in the same space as Facebook, YouTube or Twitter.

For now, Snapchat is leading the way in changing online behavior, from carefully curated and public images, to informal and private ones that can be casual, agile but most of all authentic, from which all brands can benefit.