This week it’s all about the ‘antis’, a great anti-Ronaldo advert, a bad anti-marriage campaign and an ugly anti-homeless people campaign.

The sexy piece of man meat that is Cristiano Ronaldo is unrecognisable in this ad for audio technology manufacturer Monster. The ad was shot in Madrid and was posted on Facebook, it now has over 33 million views, 1.4 million likes, 900,000 shares and over 100,000 comments.

All of sudden everyone wants to play with the homeless guy once they realise it was Ronaldo.

The Marriage Alliance is a group of same-sex detractors who believe: “we are not ready to have same-sex marriage in Australia”. Their ad, where they compare same-sex marriage to a sinking ship, is full of slippery slope nonsense like Australia is doomed if marriage equality happens.

The ad is so cringe-worthy that the opposition team Australian Marriage Equality posted the video to their Facebook page commenting: “Despite it being an ad by opponents of marriage equality we’re happy to share it with you. Notice a few things? No real people, no actual problems …just the same old “unintended consequences” scaremongering”.

The extreme right Sweden Democrats party have plastered Östermalmstorg train station with posters and banners that imply homeless people are involved in organized criminal activity. Stockholm’s public transport operator have taken down the anti-begging campaign after protesters climbed on to escalators and tore at the controversial advertisements (see below). 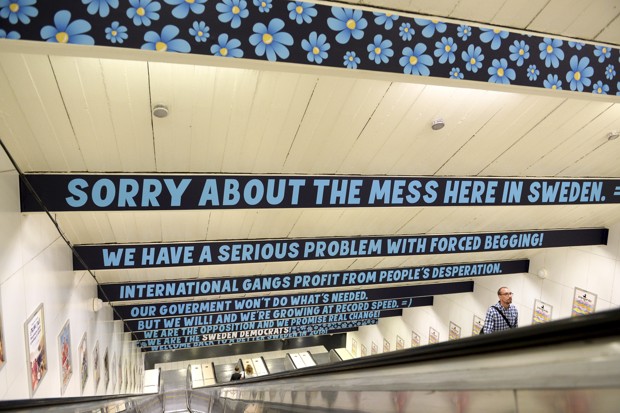 Locals protested this week, thousands of Stockholmers protested about the campaign.