The Sydney Swans have once again been anointed AFL’s most supported team boasting some 1.204 million fans according to its annual fan study by Roy Morgan Research.

However, things weren’t so rosy for cross-town rival Greater Western Sydney (GWS Giants) who came second last for number of fans with only 175,000. The Gold Coast Suns were last with 106,000 fans. 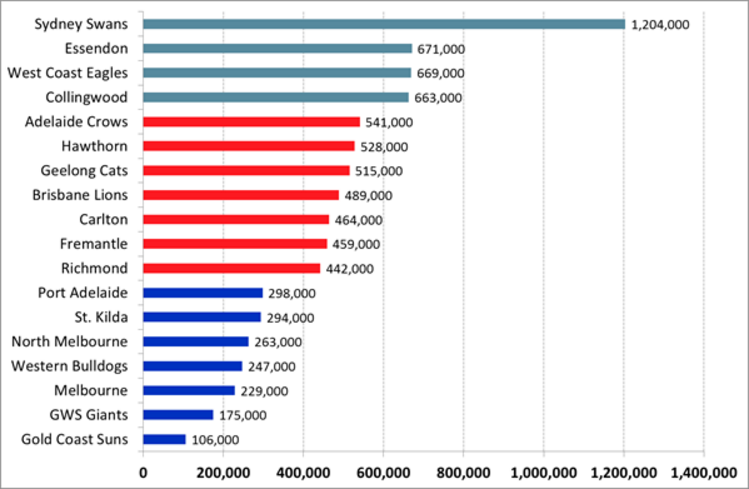 A rejuvenated Essendon were the most widely supported Victorian club with 671,000 supporters, an increase of 127,000 (up 23.3 per cent) on 2016 when Essendon had 18 of their players banned from taking part and “won” their first Wooden Spoon since 1933.

Traditional Victorian powerhouse Collingwood slipped to fourth on the supporter ladder with 663,000 supporters, losing 117,000 supporters (down 11.6 per cent), and falling below their traditional ANZAC Day rivals for the first time since 2007 after coach Nathan Buckley led the team to a fourth successive year without finals action.

Premiership drought-breakers the Western Bulldogs have far fewer supporters than their vanquished opponents with 247,000 – virtually unchanged on a year ago. The Bulldogs disappointing year on-field is clear evidence that Premiership hangovers after drought-breaking Flags is a real phenomenon – ala Hawthorn 2008-09, and look how Hawthorn bounced back from that unexpected slide down the ladder as Premiers.

Although it is no surprise to see the traditionally well-supported clubs at the top of the overall AFL club supporter ladder, a key metric for AFL clubs is their ability to convert their latent support into paying memberships that directly benefit the clubs. 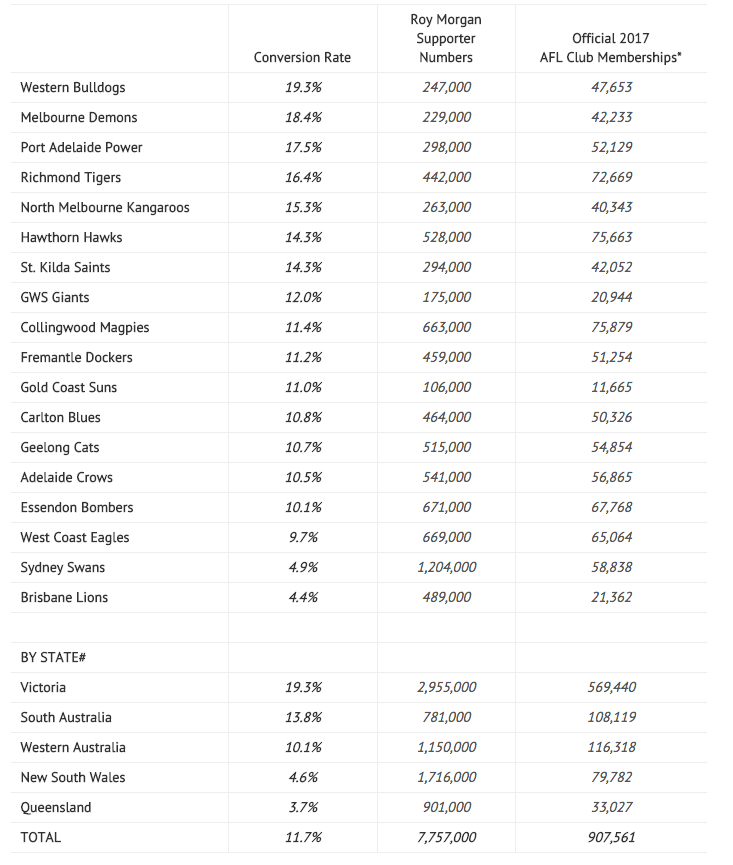 Commenting on the study’s findings, Gary Morgan, Executive Chairman, Roy Morgan Research, said: “The Sydney Swans have retained their standing as Australia’s most widely supported AFL team for the 13th straight year with over 1.2 million supporters putting the ‘Bloods’ over half-a-million supporters ahead of any other club.

“Victoria’s top club is Essendon with 671,000 supporters following a ‘year from hell’ in 2016 in which 18 players were suspended for the entire year and the Bombers plunged to their first Wooden Spoon as the competition’s worst performed team for over 80 years.

“The ‘Big 4’ of the AFL is rounded out by the West Coast Eagles with 669,000 supporters and set to play their next game in the brand new 60,000 capacity Perth Stadium in 2018 which should provide a huge boost to Eagles memberships, and the bottom line, and what is often regarded the ‘most hated club’ in the AFL, Collingwood, with 663,000 supporters.

“In terms of passion – Victoria remains the beating heart of the AFL with nearly 3 million supporters buying just under 570,000 AFL club memberships in 2017 – a conversion rate of 19.3% of supporters to members ahead of South Australia (13.8% of supporters become members) and Western Australia (10.1%).

“These high conversion rates underpin the strong attendances of the AFL. In 2017 there are 7,757,000 supporters of an AFL club around Australia and this week the AFL is set to break the all-time attendance record set in 2010 (7,146,738) for an AFL season during the Preliminary Final between Richmond and the GWS Giants on Saturday night.