The Sydney Swans remain the most supported club in the AFL, with 1.1 million supporters according to the 2019 annual Roy Morgan AFL club supporters survey.

Still, it was worse news for the Gold Coast Suns. According to the research, it has only 35,000 supporters, down a staggering 57.8 per cent year on year.

Reigning AFL Premiers West Coast Eagles had the biggest increase lifting their support base by a huge 186,000 (34 per cent) to 733,000 to be Australia’s second most widely supported AFL club. 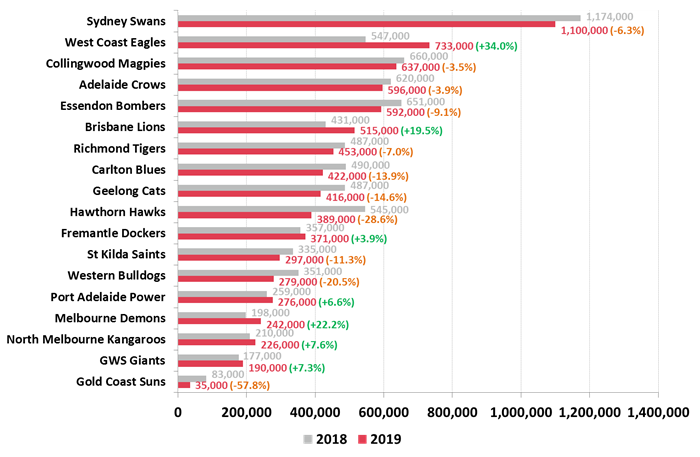 Although it is no surprise to see the traditionally well-supported clubs such as the Sydney Swans, Collingwood, Essendon, Adelaide and West Coast at the top of the overall AFL club supporter ladder, a key metric for AFL clubs is their ability to convert their latent supporters into financial members that directly benefit the clubs.

On this important metric it is the supporters of one of the AFL’s newest clubs the Gold Coast Suns who are most committed to their team converting 39 per cent of their supporters to become club members – which is unfortunately for the Suns the lowest in the league at only 13,649. 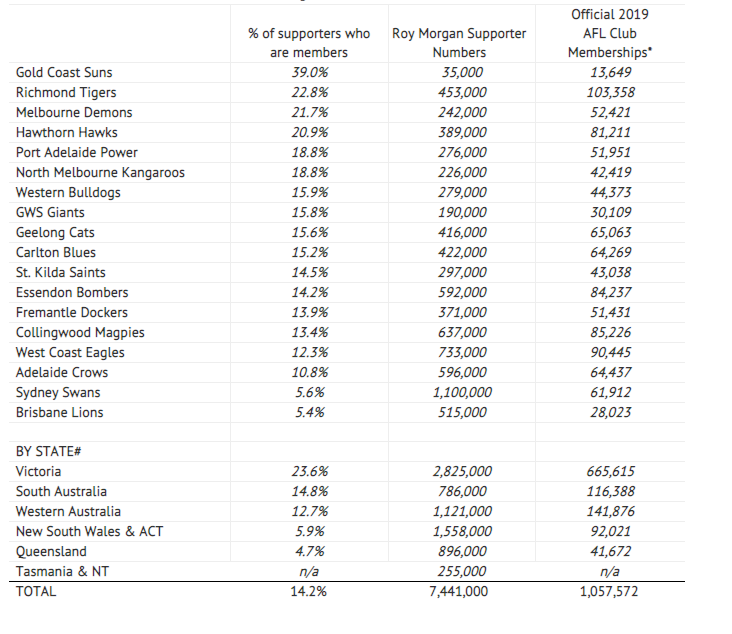 In 2019 the quintessential supporter of the oldest football club in the land is well-educated, Victorian, and with a diploma or degree under his belt. Yes, he’s more likely to be male than female. He’s a young parent under 35 years old with pre-school aged children and likely following in the footsteps of his Melbourne supporting parents – Melbourne supporters are also over-represented amongst the over 65s who were around to experience the club’s last successful period in the 1950s and 1960s.

Our favourite Melbourne supporter is more likely than the average Australian to order pizza or other foods for home delivery, and head out for a rock or pop music concert or jazz, classical or blues performance or enjoy some live theatre. As well as watching the AFL on TV he also likes to watch other sports including golf, cricket, soccer, the Olympic Games and car racing.

Supporters of the Brisbane Lions are emerging from hibernation in 2019 with the AFL’s northernmost club set to play finals again for the first time in a decade this September. Over two-thirds of Brisbane Lions supporters are men and support for the Lions is particularly strong amongst Generation X now aged in their 40s and 50s.

The characteristic Lions supporter is far more likely than the average Australian to have a high school education, work full-time and have an average household income of $110K. He’s in a Mid-Life household with teenage kids and likely in the Visible Achievement Roy Morgan Values Segment – ‘Despite being successful they retain traditional values about home, work & society. The family is very important to this Segment and they place great emphasis on providing their families with a high quality environment.’

Our quintessential Lions supporter is far more likely than the average Australian ‘to love to do as many sports as possible’, ‘to always read the business section of the newspaper’ and ‘quite often finds TV advertising more entertaining than the programs’. He’s also more likely to ‘keep up-to-date with new ideas to improve his home’.

He’s not only twice as likely as the average Australian to attend professional sporting events such as following his favourite footy team but also to play a game of pool, snooker or billiards and far more likely than most to go to RSL or Leagues clubs. Being a northern States AFL supporter doesn’t mean disregarding the other football codes and he’s far more likely to watch other football codes including rugby union, the NRL and soccer on TV than the average Australian.