The latest Australian Multi-Screen Report from regional TAM, OzTAM and Nielsen has revealed what Aussies are doing when it comes to engaging with their many, many screens.

One ongoing trend is that Australian households have more screens, an average of 6.4 per home to be exact, up from 5.4 in the first quarter of 2012.

Tablets have seen the most dramatic growth, while the old living room telly has dropped off from two per household to 1.9. But that’s not to say we’re not watching TV; OzTAM Video Player Measurements show that around 2.3 million connected devices are having a crack at catch-up TV each week.

Around 86 per cent of Aussies are also tuning in to their favourite free-to-air TV show each week on the box, and across all screens, devices and videos, 84.3 per cent of viewing is of TV content watched on in-home sets within seven days of the original broadcast.

It’s also evident that the older you are, the more you’re sticking to what you know – and that means sticking to broadcast television viewing.

The kids, teens and 18-24-year-olds lead the way in watching online videos on laptops, but stats show the TV still dominates: 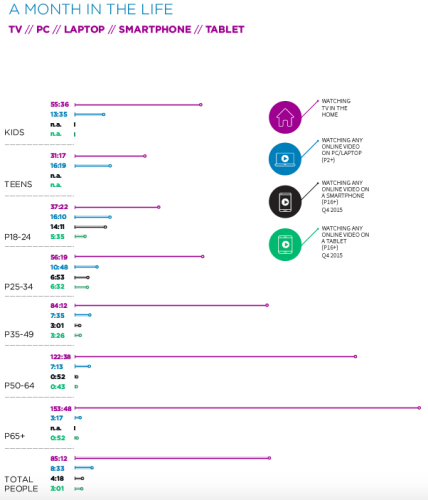 ‘Longer-tail’ viewing is another growing trend, with 1.6 per cent of all broadcast TV watched on in-home TV sets in any four-week period is played back between eight and 28 days of the original broadcast. In prime time the proportion of 8-28-day playback rises to 2.1 per cent.

Seventy-six per cent of Aussies reckon they can adequately multi-task, and use multiple screens at any one time, tweeting, texting and watching two-plus things at once on a number of screen devices.

The 35–49 and 50–64 year-old segments both increased their multi-screen behaviour, which would explain the rise of parents Facebooking about their favourite scene in Home & Away or The Voice, following their kids teaching them how to use it at all.

When it comes to common activities on certain devices, banking rules the desktops, email and news top tablet activity, and smartphones are crucial for getting info outside of the home – think checking the weather and reading maps. 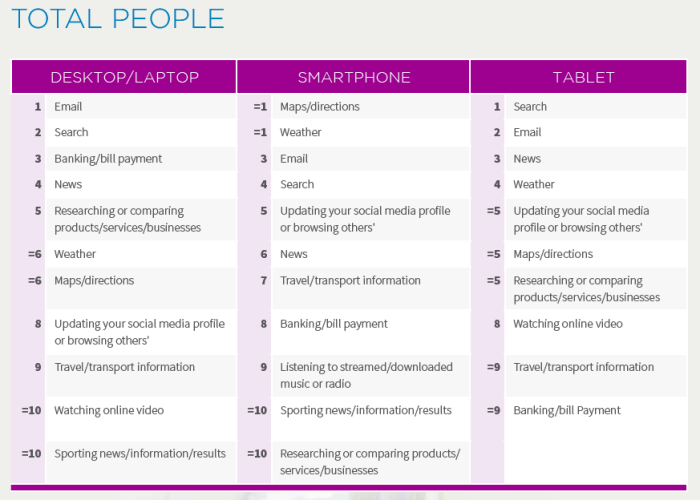 “Since 2012 the Australian Multi-Screen Report has tracked the impact of new technologies on viewing of TV and other video content.

“The interesting thing in the latest quarter is that 8-28 day playback viewing on TV sets, and VPM content played on connected devices, together add approximately 2.5 to 3 per cent of viewing on top of 7-day Consolidated broadcast viewing. While relatively small overall, for certain individual program episodes this longer-tail and VPM viewing can be significant.”